I have been posting preliminary information on dates that are widely assigned to the Book of Revelation but have decided to jump ahead and make it clear where these posts are headed.

Thomas Witulski has presented some interesting arguments for dating Revelation to the time of the lead up to and beginning of the Bar Kochba war in the time of Emperor Hadrian, between 132 and 135 CE.

So how does that setting fit with the “four horsemen of the apocalypse”?

Okay, so what about the measuring of the temple?

The rebels’ programme of (re)building the Yahweh sanctuary in Jerusalem and reinstalling the priestly-dominated cult of the temple should also be understood in this context: (a) The measuring out described in Apk 11:1-2a for the purpose of rebuilding or reestablishing the temple, the θυσιαστήριον and the worshippers there presupposes that these buildings and conditions are not present or destroyed at the time of the writing of the Apk. This obviously corresponds exactly to the conditions in Jerusalem at the threshold of the Bar-Kokhba revolt, as Cassius Dio describes them2, (b) The depiction in Apk 11:1-2a. according to which the apocalyptic was commissioned to measure the temple, the θυσιαστήριον and the people worshipping there for the purpose of new construction or rebuilding, but did not (or could no longer) carry out this commission3, ties in with the corresponding programme described above. At the same time, however, it also reflects the apocalypticist’s assessment of the further course of the rebellion, which he had to arrive at after taking into account the various measures taken by the Romans to put down the uprising5: The rebels did indeed consider Jerusalem and the sanctuary of Yahweh. Jerusalem and the Yahweh sanctuary and to reinstall the temple cult; in the end, however, the ναός τοΰ θεού and the associated θυσιαστήριον – at least according to the apocalypticist’s assessment – will not be rebuilt, for those who want to worship there and practise the Jewish worship of God, there will not be such a possibility (anymore).

The historical reference of Apk 11:1-2a to the first phase of the Bar Kokhba revolt becomes even more conclusive if it is assumed that the decision to (re)found Jerusalem as the Roman colony of Aelia Capitolina and, in connection with this, the decision to erect a pagan sanctuary there can be dated to the time immediately before the military escalation, i.e. around 130 AD. Then the statements of Apk 11:1-2a could be referred to these decisions of Hadrian without any problems: The apocalypticist is supposed to measure the temple, the θυσιοοτήριον and the people worshipping there for the purpose of rebuilding or reconstruction.

Bar Kochba and the priest Eleazar, the political and religious leaders of Israel who were dedicated to the liberation of Judea from the Romans. I know. Questions arise. I will address details in future posts. 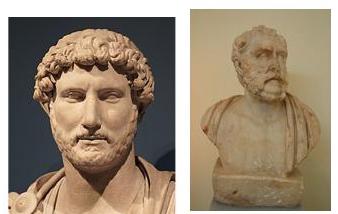 The beast and his false prophet?

Hadrian and his advisor, propagandist and rhetor Antonius Polemon.

The author expected Hadrian to kill the Bar Kochba and the priest Eleazar and that the whole world would rejoice in the destruction of those it held responsible for war.

The posts won’t be completed this week, but hopefully they will be finished before year’s end.