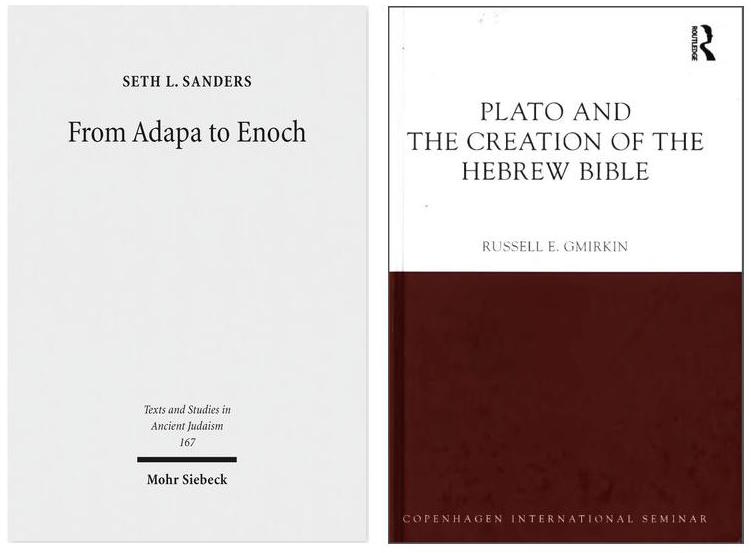 I have been posting on points of interest in Seth Sanders’ From Adapa to Enoch: Scribal Culture and Religious Vision in Judea and Babylon and have reached a point where I cannot help but bring in certain contrary and additional perspectives from another work I posted on earlier, Russell Gmirkin’s Plato and the Creation of the Hebrew Bible.

In chapter 5 Sanders sets out the view that Judean scribes in the Late Iron Age (the era of the Assyrian and Chaldean empires) took from the Mesopotamian scribal heritage “public genres of power”. Specifically:

In the Second Temple era the interest of Judean scribes turned to genres of secret, esoteric knowledge. Specifically:

Seth Sanders is interested in explaining the transition from the Late Iron Age Judean scribal culture to that of the Second Temple period, from genres of public power to genres of secrecy and esoteric wisdom.

As we saw in the previous post one of the most significant innovations the Judean scribes brought to the Mesopotamian material was the addition of a narrative context for the revealed laws, rituals and knowledge of the cosmos.

For example, the Laws of Hammurabi are bluntly introduced as being given by the sun god to the king. Contrast the laws of Exodus 21-24. Yes, they are delivered by the chief god but what a build-up: the Red Sea crossing, the Mount Sinai quaking, the tension between rebellious and obedient chosen people, the struggles of Moses to lead them, and so on!

But there are a few other details worth keeping in mind, too.

One: the amount of material supposedly borrowed from the vassal treaties is in fact arguably quite limited. Certainly there are clear similarities between the curses in both Deuteronomy and the treaties. But not much else that points to clear indications of direct borrowing. (Sanders also addresses the vagueness of some of the associations but I’ll discuss his answer in more detail in a future post.) Ditto for the borrowing from Mesopotamian Law Codes. Yes, there are clear links to the law of the goring ox in Exodus. But again, we soon run dry of comparable examples.

What of the prophetic literature of the Second Temple era? Mesopotamian prophecies, like the book of Daniel, “foretold” the historical events of successive kings rising up and doing good or bad things, but again there are notable differences, especially once again with the colourful narrative context of the Judean work. Sanders refers to the explanation of Matthew Neujahr in Predicting the Past in the Ancient Near East to point to similar historical circumstances in very different time periods leading to a blending of mantic/omen literature with chronicles or “historical” records.

I think an excellent explanation for the application of narrative framing of laws and other revealed knowledge is offered by Russell Gmirkin in Plato and the Creation of the Hebrew Bible. The same thesis further explains why so little detail from Hammurabi’s code or the vassal treaties are actually found in the Pentateuch, and further yet, points out many similarities in Exodus and Deuteronomy to Plato’s discussion in Laws. Of particular importance, Plato wrote, was that law codes be presented with divine and antique authority and not as precepts newly hatched by a recent fallible generation. Myths or stories of origins were important for their presentation.

If we accept Gmirkin’s view then what we find is not a progression from “public genres of power” in the Late Iron Age to “secret and esoteric wisdom” in the Second Temple period, but rather we have different scribal schools — compare Philip R. Davies’  thesis in Scribes and Schools. To what extent these schools were contemporary I would not like to speculate, though it seems we would have to confine ourselves to the Hellenistic period unless there was more cultural overlap between Greeks and Persian dominated lands prior to Alexander’s conquests than I am aware of. At this point we are on the edge of too many questions and pathways to explore to be covered in a few short posts.

But with this interlude now done I feel I can resume posts on Sanders’ book.

4 thoughts on “Who Influenced Biblical and Second Temple Jewish Literature?”