skip to the end of this post where I cite one of several explanations. 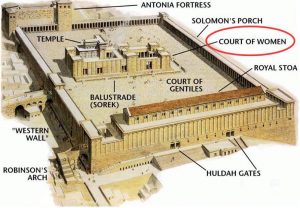 I don’t know the answer to the question in the title (in part because much depends upon how we define and understand the origins of “Christianity”) but I can present here one argument for the possibility that there was a belief among various Judeans prior to the destruction of the Temple in 70 CE that a future messiah was destined to be killed. (This post goes beyond previous posts addressing messianic-like interpretations of the Suffering Servant passage in Isaiah 53 that we find in Daniel and the Enoch literature and builds upon other earlier posts addressing the evidence in later rabbinic and other Jewish writings.)

We focus here on a 2005 article by David C. Mitchell in Review of Rabbinic Judaism, “Rabbi Dosa and the Rabbis Differ: Messiah Ben Joseph in the Babylonian Talmud“. I find a number of aspects of the article questionable, but nonetheless Mitchell does present a somewhat technical argument in support of the possibility of a pre-Christian belief in a slain messiah.

Recall that in my recent post, Suffering and Dying Messiahs: Typically Jewish Beliefs, we read a Jewish narrative from the early 600s CE describing a Messiah son of Joseph being slain in battle against end-time forces of evil. The earliest surviving reference to the Messiah ben (=son of) Joseph is in the Talmud. If you are like me your first reaction to hearing that will be “How can writings up to several centuries into the Christian era possibly be used as reliable sources for events and ideas in first century Palestine?” But also if you are like me you will be at least open to hearing the case being made. So here it is as I understand it.

Talmud: Rabbinic writings made up primarily of two parts, the Mishnah and the Gemara.

The Mishnah purports to be the written collection of oral traditions of rabbinic debates and teachings. The Mishnah was completed around 200 CE.

The Gemara is rabbinic commentary on the Mishnah and is said to have been composed between 200 CE to 450 CE.

There are two broad chronological eras represented in the Talmud: the Tannaitic and the Amoraic.

The Tannaim is identified by Hebrew text and represents ideas prior and up to 200 CE.

The Amoraim is identified by Aramaic text and represents the period subsequent to 200 CE.

In the Mishnah we sometimes read both Hebrew and Aramaic text in the one section. We understand that the Aramaic text has been added by rabbis post 200 CE to fill out or clarify the earlier Hebrew account.

It will help to know some important terms relating to the Talmud. I explain these (hopefully not misleadingly simplified) in the side box.

The earliest known references to Messiah ben Joseph are found in a section (or tractate) called Sukkah. (Scroll through the Talmud page at http://www.halakhah.com to see where it sits in the broader collection.) The Sukkah tractate relates to the Feast of Tabernacles (see https://en.wikipedia.org/wiki/Sukkot).

I copy the first of these passages, Sukkoth 52a, as Mitchell himself sets it out, with the later Aramaic passages in italics, but I have added bolding to make it clearer:

“And the land shall mourn family by family apart. The family of the house of David apart and their women apart” (Zech. 12:12). They said: Is not this an a fortiori conclusion? In the age to come, when they are busy mourning and no evil inclination rules them, the Torah says, “the men apart and the women apart.” How much more so now when they are busy rejoicing and the evil inclination rules them. What is the cause of this mourning? Rabbi Dosa and the rabbis differ. One says: “For Messiah ben Joseph who is slain;” and the other says: “For the evil inclination which is slain.” It is well according to him who says, “For Messiah ben Joseph who is slain,” for this is what is written, “And they shall look upon me whom they have pierced, and they shall mourn for him like the mourning for an only son” (Zech. 12:10); but according to him who says, “The evil inclination which is slain:” Is this an occasion for mourning? Is it not an occasion for rejoicing rather than weeping?

I understand from Mitchell’s discussion that the highlighted words above are translations of Aramaic text. The remainder is rendered from Hebrew.

Accordingly we have in this section of Mishnah, typically dated prior to 200 CE, later rabbinic additions in Aramaic. But the Aramaic text is quoting references to Messiah ben Joseph that are in Hebrew text.

Mitchell argues that the Aramaic script is the work of Amoraic (post 200 CE) rabbis commenting on a tradition from the Tannaitic era (prior to 200 CE). He disagrees with another scholar (Joseph Klausner) who believed we should interpret the passage as indicating that the tradition of Messiah ben Joseph itself originated some time in the later Tannaitic era (200-450 CE).

Let’s back up a little. Let’s see what light the broader context might be able to shed on the question of dating.

Immediately prior the section mentioning Messiah ben Joseph we read about worshipers at the end of the first day of the Feast going down to the Court of Women at the Temple where a significant change is encountered:

Mishnah: At the conclusion of the first Festival day the priests and the Levites descended from the Israelites’ courtyard to the Women’s Courtyard, where they would introduce a significant repair, as the Gemara will explain.

Gemara:  What is this significant repair? Rabbi Elazar said that it is like that which we learned: The walls of the Women’s Courtyard were smooth, without protrusions, initially. Subsequently, they affixed protrusions to the wall surrounding the Women’s Courtyard. Each year thereafter, for the Celebration of the Place of the Drawing of the Water, they placed wooden planks on these projections and surrounded the courtyard with a balcony [gezuztra]. And they instituted that the women should sit above and the men below. (The William Davidson Talmud)

There follows a discussion about the above justification for the modification to the Temple architecture and requirement for the men and women to be kept apart in this way. As Mitchell puts it, the rabbinic discussion here represents what must have been a great debate before such a change to the Temple could have been made.

The sages in this Mishnah narrative point to Zechariah 12:12-14 as a good enough reason:

That passage is describing a Feast of Tabernacles in the messianic age: if it’s good enough for the women to be kept apart when God is ruling then it’s good enough in this day and age, too, so goes the argument.

Conclusion: the debate about the separation of men and women and the appeal to Zechariah 12:12 can be dated to the time when the Temple itself was still standing in Jerusalem and people were celebrating the Feast of Tabernacles there. That places the debate no later than 66 CE, the year of the outbreak of the war with Rome. In fact, the debate must have taken place at least a year before the final Tabernacles celebration so we can say 65 CE is the latest possible date for the debate.

On Mitchell’s interpretation, therefore, the belief that Zechariah 12:10 applied to a future Messiah ben Joseph to come in the last days and be slain at the dawn of the messianic age was extant in 65 CE.

The passage further informs us, according to Mitchell’s dating arguments again, that there was some dispute about the above belief about the future Messiah ben Joseph as early as 65 CE. Not all sages share the view of Dosa and argue that the reason the people mourn in Zechariah 12 is that “evil inclinations” have finally ended. Presumably these opponents of Dosa reject the interpretation of Zechariah 12 that holds it applies to a slain messiah in the last days.

In support of the possibility that some Jews interpreted Zechariah 12 as a pointer to an end-time slain messiah even in the decades preceding 65 CE, Mitchell writes:

Finally, we note that Dosa and the rabbis refer to Messiah ben Joseph in a quite incidental way, as if the figure were familiar to them. As Moore says,

“From the incidental way in which the Josephite Messiah and his death come in, it may be inferred that the notion was not unfamiliar.“8

Since that is so, we must ask how old a tradition this must have been for Dosa and his contemporaries to have known it. One would assume at least that it existed in their youth, in the first half of the first century. (p. 80, my formatting and bolding)

I will not push the patience of readers by delving into the various debates among scholars over the date of the Dosa in question. I will simply state that there is a possibility that the Dosa active in 65 CE could also have been alive up to the eve of the Bar Kochba war where he is referred to once more.

I will also reserve Mitchell’s discussions of the remaining two earliest records of Messiah ben Joseph for a future post.

Why a second Messiah at all? & why “of Joseph”?

I quote the following answer (without implying it is the only one on offer since Klausner opposes it to other suggestions) from Joseph Klausner, The Messianic Idea…

It seems to me that the idea of a twofold Messiah inevitably arose from the conception of the twofold character of the essentially single Messiah.

Thus throughout the earlier periods of the Messianic idea, Israel’s best minds thought of the Messiah as a king and a warrior. . . . .

Near at hand lay this idea:  The twofold character of the Messiah should be transformed into a twofold Messiah. And this was achieved by transferring to a second Messiah the function of waging war in its entirety. Therefore this second Messiah is a warrior-Messiah exclusively, and is more frequently referred to in the later Midrashic literature as “the one anointed for war” . . . .

That explanation sounds plausible and that’s the only reason I quote it here. There are passages in Daniel and Isaiah that also speak of a suffering and dying messiah that the above explanation fails to take into account. Nor can we forget other messiahs, in particular the priestly messiah that will be part of the next post in this series. I suspect some of the reasons put forward deliberately avoid coming too close to anything that might be interpreted as a close relative of some of the earliest views that fed into Christianity.

Klausner, J., 1955. The Messianic Idea In Israel From Its Beginning To The Completion Of The Mishnah. The Macmillan Company.
The following two tabs change content below.

11 thoughts on “How Early Did Some Jews Believe in a Slain Messiah son of Joseph?”