I was lamenting the way so many discussions about Islamic terrorism turn out to be not really discussions at all with a friend this morning and he reminded me of a few basics that sometimes slip my mind.

I’m referring to my previous post here. Nick Cohen was not responding to the actual arguments of the other side. He was reading right past the actual words spoken and using them as signals to assess what he believed to be the values, the beliefs, the intentions of the other side of the debate.

The other side is a “regressive left”, they would have us all sympathize with the terrorists and blame the West and limit our freedoms so that no-one offends any Muslim, and anyone who dares criticise the religion of Islam is labelled an Islamophobe. It is not difficult for me to interpret some commenters on Vridar as thinking the same of me on the basis of what I write.

So why are such absurdly false charges made in the first place?

I was reminded of the answer. It is to shut debate down. If the other side is shown (it is believed) to be on the side of the enemy then that settles the matter.

That led me to thinking about my analogy with the study of the rise of Nazism in the Germany of the 1920s and 30s.

Imagine the research that has been undertaken and published over the years were being expressed at the time, that is, in the 1920s and 30s. Would some people have been offended and accused the authors of “explaining Nazism away” and “effectively supporting Nazism” and of saying we deserved to suffer another world war?

Would they have accused us of being mouthpieces of Hitler and supporting him by quoting him and his writings to explain some contributing reasons for Nazism’s emergence?

There is safety in hindsight. It is safe now to do all of that to explain Nazism without being accused of whitewashing the crimes of Nazism or justifying Hitler’s wars.

(Actually some of what has been understood by historians was indeed understood and expressed by some in Hitler’s own day. It didn’t take an Einstein to grasp the role of the war guilt clause and reparations terms of the Versailles treaty in fomenting a discontent that to a significant degree fuelled Nazism’s rise.)

Yet attempting to understand today’s threatening movement the same way is almost guaranteed to prompt some to accuse us of being justifiers of terrorism.

The arguments, what we say, are ignored. Not completely ignored. The trigger words that evoke judgements of values and motives are latched on to and spur the accusatory responses. Maybe not even the trigger words. Maybe just the general idea — if the idea is not identical to “blaming Islam and the Quran” as the primary and sufficient reason for all the barbarism of ISIS and other terrorism.

And that brings me to another TYT commentary on a recent Gallup Poll: Views of Violence. Look at two of the findings of this Gallup Poll: 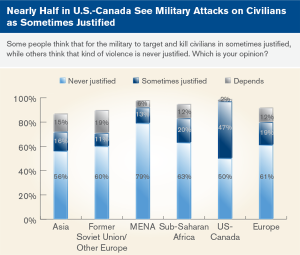 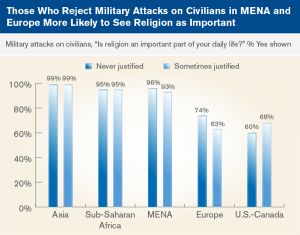 A couple of people who commented on the TYT site justified the findings that there is much greater support for sometimes (“when necessary”) deliberately targeting civilians by military forces in the US and Canada than there is in MENA countries.

After all, they said, we “have to bomb civilians” in Muslim countries because they support terrorists.

Just like we had to firebomb Germany then firebomb and nuke Japan, just like the commander had to shoot random rounded up civilians in a village to save the lives of his soldiers from further terrorist attacks from among those civilians.

What the attitude depressingly demonstrates is our dehumanization of the other. “They” are just a blanket mass. Muslims, too, are just a monochrome mass. There is no thought or a glimmer of awareness that many of those civilians, even (or especially) those under ISIS rule, have no choice, or that they are forced to choose between evils and whatever is going to be of immediate help in keeping their families alive and reasonably less insecure than they were before ISIS took over.

There is no hint of awareness of what factors are really involved in the rise of today’s extremist Islamists in the West, who these people are (Muslims, aren’t they?), what they are reading (the Quran, isn’t it?) . . . .

What is the wisest way to handle all of this? How to discuss?

I’ve been reading a fair bit about the what our moral systems are and how they may or may not work. Still have a long way to go to understand what I really want to understand.

39 thoughts on “Why have discussions about Islamic terrorism turned out like this?”