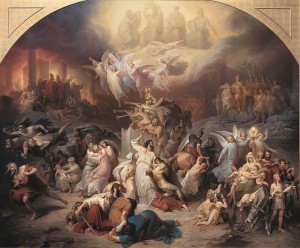 Passages that for modern fundamentalist readers refer doctrinally to Jesus’ death and some imaginary “end time” in some indefinite future:

49 I came to cast fire upon the earth; and what do I desire, if it is already kindled?
50 But I have a baptism to be baptized with; and how am I straitened till it be accomplished
51 Think ye that I am come to give peace in the earth? I tell you, Nay; but rather division:
52 for there shall be from henceforth five in one house divided, three against two, and two against three
53 They shall be divided, father against son, and son against father; mother against daughter, and daughter against her mother; mother in law against her daughter in law, and daughter in law against her mother in law.

23 Woe unto them that are with child and to them that give suck in those days! for there shall be great distress upon the land, and wrath unto this people.

28 But Jesus turning unto them said, Daughters of Jerusalem, weep not for me, but weep for yourselves, and for your children.
29 For behold, the days are coming, in which they shall say, Blessed are the barren, and the wombs that never bare, and the breasts that never gave suck
30 Then shall they begin to say to the mountains, Fall on us; and to the hills, Cover us.

6 As for these things which ye behold, the days will come, in which there shall not be left here one stone upon another, that shall not be thrown down.

20 But when ye see Jerusalem compassed with armies, then know that her desolation is at hand.

24 And they shall fall by the edge of the sword, and shall be led captive into all the nations: and Jerusalem shall be trodden down of the Gentiles, until the times of the Gentiles be fulfilled.
25 And there shall be signs in sun and moon and stars; and upon the earth distress of nations, in perplexity for the roaring of the sea and the billows
26 men fainting for fear, and for expectation of the things which are coming on the world: for the powers of the heavens shall be shaken.
27 And then shall they see the Son of man coming in a cloud with power and great glory.

The Literary Form of the Gospels

A proper understanding of literary form gives us a historical meaning.

Much depends on our analysis of the literary form of the gospels. If we conclude on the basis of Gospel passages like those above that the gospels are novella-like apocalypses or apocalyptic prophecies, a variant of writings like Daniel, then by definition they are written with reference to historical events known to their original audience.

When the above passages are read with the knowledge of those events, the war with Rome and the destruction of Jerusalem, then they refer both to the death of Jesus and the catastrophic fate of Jerusalem.

Thus a proper understanding of literary form gives us a historical meaning. (Clarke W. Owens Son of Yahweh: The Gospels as Novels)

Yet it is very widely agreed that the gospels do refer to an event still future to us, today, as well as to a historical crucifixion under Pilate. Recall, however, that Clarke Owens is attempting to help readers see the Gospels outside the context of the canon of the Bible and to understand them as discrete writings in their historical and literary contexts. What does Clarke Owens believe has gone wrong in order for what he believes is such a pervasive misinterpretation of the Gospels. 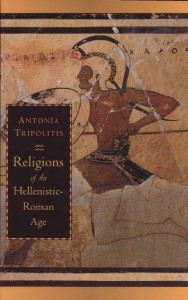 To begin, we need to define what we mean by apocalyptic literature. Owens uses the definition of Antonia Tripolitis:

Jewish apocalyptic literature flourished and enjoyed an enormous popularity both within Palestine and the Diaspora between 200 B.C.E. and 90 C.E. . . . The apocalypticists continued the tradition of the prophets by adopting the major themes of the prophetic teachings, in particular the prediction element, and incorporated them into a novel world-historical, cosmic form. Many apocalyptic works were written during times of hardship and oppression. These conditions were depicted by the writers in a cosmic setting, perceived not only as a local or national situation but one of universal significance, and accompanied by supernatural signs. (Antonia Tripolitis, Religions of the Hellenistic-Roman Age, pp. 69-70, Italics original — points Owens will address.)

Tripolitis goes on to point out that “apocalyptic literature does not lend itself to a systematic description. It is not a homogeneous corpus and varies in form, emphasis, and in the presentation of the message.” The most important characteristic of the apocalyptic is its prophetic element. So Owens points out that given the many allusions and parallels to the books of prophecy we can be sure the Gospels continued in “the tradition of the prophets”. Recall the Gospel of Mark’s famous opening with a hybrid quotation from Isaiah, Malachi and Exodus; the virgin birth narratives in Matthew and Luke apparently deriving from what was understood to be a prophecy in Isaiah; the image of the Suffering Servant, and so forth.

But the most important precursor for the prophetic element of the Gospels, Owens argues, is the Book of Daniel. Owens focuses on Matthew but for an extended picture I link here to early posts of mine (Mark 13 and Passion and Resurrection chapters) in which we can see the importance of Daniel to the author of Mark’s Gospel, too.

When therefore ye see the abomination of desolation, which was spoken of through Daniel the prophet, standing in the holy place (let him that readeth understand) then let them that be in Judea flee unto the mountains.

More events are foretold and then we come to another passage from Daniel in Matthew 24:30

I saw in the night visions, and behold, one like the Son of Man came with the clouds of heaven, and came to the Ancient of Days, and they brought Him near before Him.

Owens stresses the important point: it is to note is that both books, Daniel and the Gospel, operate the same way.

That is, both books are structured around three chronological points of reference:

A — the story setting in the past / “historical time implanted with a fictional event, namely the prophecy”;

B — the historical event that was prophesied in the above story, announced in vague universalistic and cosmic terms yet understood by the readers;

C — the readers/hearers recognize the

event has having recently taken place within their own time.

The historical event is never made explicit. It is always alluded to in ambiguous, cosmic and universalistic language. It is an event known to everyone but in this literature is expressed ambiguously to stress its “cosmic significance”, as well as “for aesthetic, political, or theological reasons”.

A direct, news-like matter-of-fact depiction of the event would not convey that necessary “cosmic significance” that is captured by the mysterious coded language.

It is essential to realize (and the error occurs precisely in not realizing) that the knowledge of [the prophesied event] from the vantage point of [the original readers] is inescapable. This is how apocalyptic literature works. It is how Daniel worked, and it is how the gospels were meant to work.

Daniel prophesied of Antiochus Epiphanes setting up the pagan statue in the Temple in 168 BCE. Nowhere, however, does he make this event specific. It is presented as an event of “universal significance” in a “cosmic setting”. It is presented as an “end-time” event. Owens lists three reasons for this manner of writing:

The bolded third reason is “not sufficiently clear” to readers today, warns Owens. It is the reason for so much misreading of the gospels.

Could it refer to Caligula? A time in the future?

A good number of scholars and many more lay readers question whether the prophecy really refers to the destruction of the Temple. Why? Because, they reason, Jesus told his followers to “head for the hills” in Judea when they saw the abomination. Yet Josephus makes it clear that the surrounding hills were occupied by the Romans!

Owens argues that such an expression is in the same order as the command by Jesus for those on the roofs of houses should not go back down to collect their goods, and for those in the fields not to run back and get their cloak.

These are not directions about where to stand on one’s property, but figures meaning that the jig is up and the end of the world is at hand.

But the end of the world has a very real meaning to Jews living [as the first readership of Daniel/the Gospels]: it has a meaning that is utterly inescapable and mentally oppressive. This is the historical fact that scholars have failed to imagine properly, even though the evidence for it amply exists; with respect to the gospel’s eschatological predictions, the evidence is in Josephus.

With respect to the form-functional parallel between (at least) the synoptic gospels and the Book of Daniel, it is in the imagery of the earlier and later books and in the explicit reference to the earlier book in the later books. Thus,

Once the nature of apocalyptic literature is understood and the apocalyptic character of the gospels is appreciated, then that other scholarly suggestion that Jesus’ prophesy was inspired by the attempt of Caligula to set up an image in the Jerusalem temple in the 40s has to be eliminated.

If the synoptic gospels were completed between 70 and 100 CE then it is certain that they were written in response to the events of 70 CE.

(There is some room to ask if the gospels were rather written in the wake of the second Jewish war in the 130s but that’s another question for another time.)

To sum up, writers and scholars have already recognized:

(1) a degree of allusion to the events of 70 C.E. in the apocalyptic imagery of the gospels;

(2) evidence of midrashic composition of the gospels which eliminates literalist readings;

(3) the contemporaneity of the destruction of Jerusalem in 70 C.E. and the composition of the first (Mark’s) gospel;

(4) historical confirmation of the tendency toward messianism as a response to Roman oppression, again, primarily through Josephus (See II:258-63);

(5) recognition that the gospels are within the tradition of apocalyptic, prophetic literature as typified by Isaiah and Daniel.

To this sum, I have added merely:

(6) textually external, historical confirmation of messianism as a pattern of response to threatened cultural extinction, as seen in the Lakota; and

(7) consideration of the relationship of the apocalyptic genre pattern to the most likely perceptions of world events in the minds of the gospels’ contemporary readers.

I have only addressed the main theme of Owens’ book. The rest of his book explores how the argument is worked out in each of the gospels and Acts. It is available at amazon.

28 thoughts on “Constructing Jesus and the Gospels: Apocalyptic Prophecy”