In Berossus and Genesis, Manetho and Exodus: Hellenistic Histories and the Date of the Pentateuch Russell Gmirkin presents a case for the Books of Moses, Genesis to Deuteronomy, being based largely upon the writings of Babylonian and Egyptian historians:

His first task is to demonstrate that we have no evidence of any knowledge of the Pentateuch until after the appearance of those works.

In the previous post we overviewed Russell Gmirkin’s argument that there we have no evidence in Greek writings of any knowledge of the Pentateuch before the appearance of the Septuagint. Gmirkin shows that the authentic writings of Hecataeus of Abdera do reveal knowledge of Moses as a lawgiver, but the same writings do not show any knowledge of written Mosaic laws. Besides, as we will see in this post, the portrayal of Moses as the lawgiver followed the stereotypical pattern of leaders who led expeditions to found new Greek colonies: the laws were always given after the new settlement (with its cities, temple and tribal organization) was established in the new land.

This post explains how Gmirkin arrives at the date of around 270 BCE for the earliest appearance of the first books of the Bible. He concludes that

the first evidence of Pentateuchal writings is the Septuagint translation itself, probably dating to the late 270s BCE. (p. 72)

There are three remaining ancient texts that do claim these books of Moses were much older than 270 BCE.

Before reading about these, recall from the previous post that Hecataeus of Abdera (fourth century BCE) wrote that Moses first founded the new settlement of Egyptians in Palestine and then gave them their laws. This, of course, is the reverse of the story found in the books of Moses and Joshua. What Hecataeus was relating was a stereotypical story of the way Greek colonies were founded. He demonstrates no knowledge of any writings of Moses. The following accounts, in one way or another, all took their knowledge from Hecataeus of Abdera and confused his account with evidence that he had read the Pentateuch.

Certain writings ascribed to Hecataeus were quoted at Josephus, Apion 1.187- 204.

Speaking again of (Jewish high priest, Ezekias, in the time of Ptolemy 1 Soter), (Hecataeus) says: “This man, who had attained to such a position of honor and who was now part of our society, gathered together some of his friends and read to them his whole scroll. For it contained the story of their settlement and their political constitution. [that is, the ‘books of Moses’]

The authenticity of this material has long been debated . . . . The definitive treatment of this question, which settled the matter for most scholars, was Bar-Kochva’s book Pseudo-Hecataeus, which demonstrated that the essay purportedly written by Hecataeus contained considerable anachronistic material pointing to the late second century or first century BCE. Since then no scholar has seriously advocated the authenticity of the Pseudo-Hecataean account. (p. 72)

The Josephan reference to “Hecataeus” contradicts the genuine references to Hecataeus that inform us that the only knowledge the real Hecataeus had was from Egyptian priests. The accounts of the genuine Hecataeus assure us he had no knowledge whatever of Jewish scriptures or oral sources. It appears that a pseudo-Hecataeus had been crafted to explain how the writings of the real Hecataeus knew so much (e.g. the Exodus from Egypt) and so invented the story of a Jewish high priest reading the books of Moses to him.

Pseudo-Hecataeus consequently introduced a fictional account of an encounter between Hecataeus and a Jewish high priest in Egypt in order to explain Hecataeus’s apparent acquaintance with Jewish scriptures. (p. 74)

That is, the sequence in both accords with stereotyped Greek foundation stories. Pseudo-Hecataeus was entirely dependent upon Hecataeus’s Aegyptiaca.

Aristobulus likewise wrote that the Pentateuch had very ancient roots. His motivation was clear: he was “proving” that the great names of Greek literature and philosophy — Homer, Hesiod, Orpheus, Linus, Pythagoras, Socrates, Plato — owed their wisdom to Moses and the Jewish traditions.

In order to find evidence that the laws of Moses were written and translated into Greek at such an early date, Aristobulus also found (presumably in Hecataeus) early accounts of an exodus from Egypt, those people being settled in Palestine, with cities and a temple built by Moses, all followed by Moses giving them the law. Aristobulus seems to have taken this as close-enough reason to believe the Pentateuch was known very early.

The Letter of Aristeas

This letter presents a colourful narrative of how the Septuagint came to be written in Egypt by seventy Jewish priests sent from Jerusalem for that purpose. The same letter claims that before this event the Laws of Moses were well-known in both Hebrew and an earlier faulty Greek translation.

Gmirkin shows in detail that we have good reason to believe the author of this “Letter of Aristeas” was in fact Aristobulus himself. If so, it is hardly an independent witness. 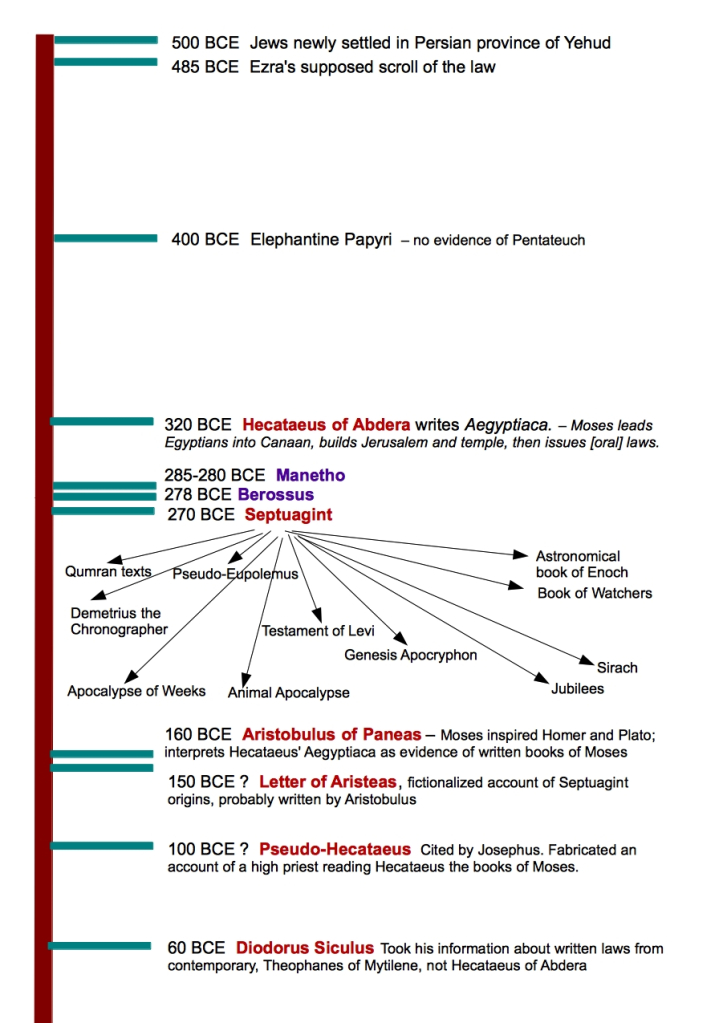 The Origin of the Septuagint

We have firm evidence that the Septuagint was being used at the time of Ptolemy IV Philopater who reigned ca. 221 to 204 BCE. Demetrius the Chronographer at that time used the Septuagint to compile his chronology of Genesis.

A few decades later we come to the time of Ptolemy VI Philometer and his tutor, Aristobulus. Aristobulus was clearly in a position to have access to the Alexandrian Library and historical material of the Ptolemaic rulers of Egypt. So we may accept that he was in a position to know when he says the Septuagint was produced under the patronage of Ptolemy II Philadelphus who reigned between 282 BCE and 246 BCE.

Unfortunately there are problems. Aristobulus is known to have made mistakes. For example, he wrote that Demetrius of Phaleron was librarian of the Alexandrian Library and supervised the creation of the Septuagint. In fact, Ptolemy II exiled Demetrius from Egypt at the beginning of his reign (and apparently arranged for him to die of an asp bite) and Demetrius was never the librarian of the Alexandrian Library.

But there is one detail Aristobulus gives us that may be a more certain clue to the date the Septuagint was composed. In the fictional Letter to Aristeas (recall that Gmirkin believes this to have been written by Aristobulus) he tells us that the Septuagint was written at the time Arsinoe II was the wife of Ptolemy II.

Though this datum is in a fictional letter, it is nonetheless true that this Arsinoe, who was the full sister of Ptolemy II, did marry her brother (according to Egyptian royal custom) some time between 279 and 273 BCE. She died in July 269 BCE.

Now we come to stories of rabbits and sexual impropriety.

More significantly, these stories are supported by data found within the Septuagint itself when read against the tradition found in the Babylonian Talmud.

That Talmud informs us that the Septuagint avoids the word for “rabbit” (arnebeth) (substituting another meaning “short-footed”) because Ptolemy II’s wife’s name in Hebrew was Arnebeth (probably a Hebrew pun on Arsinoe). The composers were keen to avoid any appearance of mocking Ptolemy and his wife. Moreover, the Greek word for rabbit, lagos, was too easily connected with the family name of both Ptolemy and Arsinoe. Their grandfather, and father of the first Ptolemy, was Lagus. Theocritus, around 273 BCE, wrote a poem in which he called Ptolemy II a Lagid.

Now the rabbit was a symbol of promiscuity in antiquity, and Arsinoe had been married twice before she married Ptolemy. A certain Satodes of Maroneia wrote a lewd epigram in honour of their marriage and was promptly imprisoned for his efforts. Unfortunately he managed to escape to Crete. “Unfortunately” because there he was recaptured, bundled into a lead coffin, and dropped into the ocean.

So it appears the royal couple were rather sensitive to rumours of sexual impropriety and jokes about rabbits.

It is true that the Septuagint does avoid the use of the word for rabbit. It would seem that the reason for this was fear of offending the brother and sister “Lagids” around the time of 273 BCE – 269 BCE (the death of Arsinoe II).

Since the Septuagint provides the first objective external evidence for the composition of the Pentateuch, the date of the Septuagint translation becomes a terminus ad quem for the books of Moses. There exists no external evidence that the Pentateuch was written earlier than the time of Ptolemy II Philadelphus. A proposed date of composition any time prior to 269 BCE is permitted by current evidence and must be seriously considered. (p. 86)

But there is evidence that something did indeed happen at the time of around 270 BCE. It is from that time that we see “an explosion of derivative Jewish writing in the third century BCE, both in Syria and in Egypt.”

The terminus ad quem evidence for the composition of the Pentateuch, decidedly at odds with the Documentary Hypothesis, allows for the possibility that the composition of the books of Moses took place as late as 273-269 BCE. There is no external evidence whatever for the Pentateuch — or any written precursor of the Pentateuch — prior to the Septuagint translation, even when such evidence would be expected under the Documentary Hypothesis. Rather, one only has evidence as late as ca. 400 BCE or what Wellhausen called “Oral Torah,” that is, an authority vested in the Jerusalem priesthood rather than in a written code of laws.

The first evidence that the Jews their laws to a figure called Moses appears in Hecataeus of Abdera’s Aegyptiaca (320-315 BCE), but this book does not yet provide evidence for the existence of actual books of Moses.

But with the Septuagint, the Pentateuch appears full-blown, in its present form. The absolute silence of external sources prior to the Septuagint translation regarding a Jewish law contrasts with a proliferation of Jewish writings using the Pentateuch following on the heels of the Septuagint. (pp. 87-88, my emphasis and formatting)