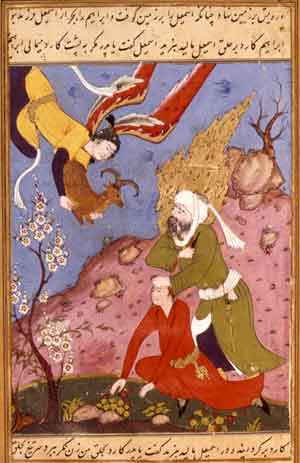 (In what follows I single out some of the more striking features of the argument and am not attempting to reproduce all of the facets and nuances Huizenga addresses. Much will be assertions of examples of intertextuality with only a little of the argument for them. This post is an outline of a chapter that is a synopsis of a thesis.)

Isaac may well make his appearance in the very first verse of the Gospel:

The book of the genealogy of Jesus Christ, the Son of David, the Son of Abraham (Matt. 1:1)

Many scholars believe this verse serves as a covering title for the entire gospel.

“Son of David” is a well-known christological label for Matthew. Might “Son of Abraham” also be the same?

The two titles in apposition, with the Son of David preceding the Son of Abraham, may well be a wink-wink that the story that follows is the story of a king, yes, but a king who is destined to be sacrificed.

So how is it that a David Messiah ends up on the cross? The king is also the antitype of Isaac. He is also the beloved son, God’s only begotten Son, as was Isaac the beloved of Abraham. Recall my earlier series sharing Jon Levenson’s finding that the first or only “beloved son” is almost a technical term for one destined to be sacrified. Huizenga quotes the same book I discuss there.

The angel’s announcement to Joseph

Sarah your wife will bear you a son, and you will call his name Isaac.

take to you Mary your wife, for she is pregnant by the Spirit. And she will bear you a Son, and you will call His name Jesus.

The baptism and the transfiguration

In each instance the heavenly voice describes Jesus as “my beloved Son” (ὁ υἱός μου ὁ ἀγαπητός in 3:17 and 17:5). Genesis 22 uses the same words with reference to Isaac (allowing for difference of person and case), addressing Abraham concerning “your beloved Son” (τὁν υἱόν σου τὁν ἀγαπητόν).

The allusion to Genesis 22 (the sacrifice of Isaac) is obscured by scholars (and bible margins) finding “a dubious reference to Psalm 2:7 = ὁ υἱός μου, where even “beloved” does not appear.

Both the baptism and transfiguration advance the themes of obedience.

The baptism contrasts Jesus’ obedience (3:13-17) with the hypocrisy of the Pharisees (3:7-12) and is linked to the wilderness temptation where Jesus proves to be an obedient personification of “Israel”.

Isaac is likewise an embodiment of Israel in Jubilees and 4Q225; Isaac also faces satanic threat as Jesus did in the wilderness:

Coming after the baptism, the temptation could be understood as an expansion of the story of the trial of Isaac. Just as the Satan figure, Mastema, sought to thwart Israel’s salvation by disqualifying Isaac or killing him, so too here in the Matthean narrative does Satan seek to disqualify Jesus as beloved Son by breaking his faithfulness to God — and by killing him, if the challenge to leap from the pinnacle is so intended. (p. 74)

The transfiguration in Matthew’s gospel is structurally tied to Peter’s confession and rebuke by Jesus over his failure to understand the need for the crucifixion. The voice at the transfiguration follows this scene and drives home the same message: the central importance of obedience to the point of death.

Peter had confessed Jesus as the glorious messiah but could not accept Jesus explaining that he must be crucified. Then at the transfiguration Peter is overwhelmed by the glory of Christ. It is at this moment that he hears the voice of God proclaiming his “beloved son” — the near technical term for the one who must be sacrificed — and commanding that he be heard. Of course what he has to say is that he is on his way to face the crucifixion. Jesus, as was Isaac, is the beloved son who must be sacrificed.

One textual echo between the transfiguration scene and the command to Abraham to offer his beloved son is the place of the “high mountain” in each narrative. Jesus takes his inner three disciples up to a high mountain (17:1) just as Abraham is commanded to take his son and two servants to a high land and sacrifice on one of the mountains there (Genesis 22:2). The Qumran scroll 4Q225 containing this Isaac offering account interestingly has the same expression (going to the high mountain) as we read in Matthew of the transfiguration. Huizenga observes that the only other high mountain in this Gospel is found in 4:8 where Satan calls on Jesus to worship him, “thus supporting the suggestion that the temptation narrative should be read as the testing of Jesus as a beloved Son as a type of Isaac.”

The Beloved and the Gentiles

There is another section in Gospel — Matthew 12:18-21 — where Jesus is likewise depicted as the “beloved” being threatened by Satan — just as was Isaac in the Second Temple Jewish beliefs. In the Matthew passage Jesus is said to be the Beloved one of Isaiah 42:1-4 in the context of the Pharisees, being led by the prince of demons, are seeking to kill him. And Jesus’ death, of course, is what opens up salvation for the gentiles. Among Jews of the day, it must also be noted, were those who believed that Isaac’s sacrifice was linked with Israel’s mission to the Gentiles. For the evidence of this see the discussion on the work of “Pseudo-Philo” in this earlier post.

Gethsemane and the arrest of Jesus

Here we find the most detailed verbal allusions to the Akedah — the “binding of Isaac” in Genesis 22.