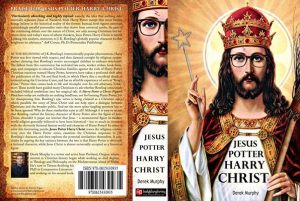 All posts in this series are collated here.

Chapter three of Derek Murphy’s book, Jesus Potter Harry Christ, discusses the evidence commonly cited for the historical existence of Jesus. In his view the arguments used to support the historicity of Jesus

are often a mixture of inferences, deductions and references to common knowledge and unfounded associations. (p. 68)

He uses Lee Strobel’s claims for “overwhelming evidence” for Jesus’ existence as his foil, beginning with the claim that gospels such as that of Luke are “so painstakingly accurate” in their historical details. Murphy knocks this argument out flat by comparing the many researched minute details and accurate facts in the tales of Dan Brown’s Da Vinci Code and Rowling’s Harry Potter.

Other common arguments are addressed and refuted with reference both to the facts of the historical record and the logic of the claims themselves: END_OF_DOCUMENT_TOKEN_TO_BE_REPLACED

The following post by Gilad Atzmon is copied from his blog with his permission.

GILAD ATZMON: TIME IS RIPE FOR A PARADIGM SHIFT

It is slightly embarrassing for me to admit that sometime Zionists are actually well ahead of our favourite intellectuals in understanding the depth of the Israeli/Palestinian conflict. It is not that they are more clever, they are just free to explore the conflict without being subject to the tyranny of ‘political correctness’, also being proud nationalist Jews- they do not need the approval of the Jewish left thought police.

I have recently come across a short Haaretz article by Israeli writer A.B. Yehoshua*.

Yehoshua is a proud Zionist, He believes in the right of his people to dwell on Palestinian land. He is also convinced that the Jewish state is the true meaning of contemporary Jewish life. I guess that Yehoshua loves himself almost as much as I despise everything he stands for and yet, I have to confess, he seems to grasp the depth of the Israeli Palestinian conflict’s parameters slightly better than most solidarity activists I can think of. END_OF_DOCUMENT_TOKEN_TO_BE_REPLACED