2009, the 150th anniversary year since the publication of Darwin’s On The Origin of Species, Creation Ministries International have released a documentary film on Darwin, The Voyage That Shook the World, through Fathom Media, their specially created “nonreligious-looking” front organization. 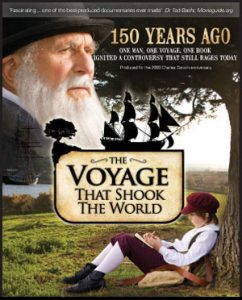 A Christian fundamentalist friend asked me to view it, which I eventually did. Unfortunately, predictably, there is nothing new in it as far as creationist anti-evolution arguments are concerned.

The film is bracketed by references to Darwin’s own admission that he loved to fabricate (“lie”) tall stories as a child and his ability, or “gift”, to create an illusion that a simple story of origins could explain all there was to know about nature. In between (approx 45 minutes) there are numerous references to Darwin being so fixated on Lyell‘s uniformitarian ideas that he simply failed to see, or ignored, or “shoehorned” evidence that did not support what he was “looking for”. In other words, the film’s tenor portrays Darwin as entrapped by self-deceit. This is entrenched from the outset with references to both Charles Darwin’s grandfathers, Erasmus Darwin and Josiah Wedgewood, as “free-thinking rationalists and humanists”, and regular reminders that Charles was influenced by Erasmus’s writings on evolutionary ideas. And finally it is noted that a notable contribution of Darwin was his ability to tell a story that could appeal to the public, and an ability to persuade readers to at least entertain some of his ideas for a while.

This, of course, is calculated to imply that the whole theory of evolution is itself grounded in delusion and denial. There is little if anything in this film to remind or alert audiences that scientific enquiry itself is all about constantly examining and questioning the assumptions underlying its interpretations of the evidence, let alone taking on board new evidence for testing.

Rather, the film attempts to convince viewers that it is the creationists who are the more scientific than evolutionists. Twice the film asserts that scientists from the eighteenth and nineteenth centuries traced back to Greek philosophers their conviction of fixity of the species. Against these it is claimed that anyone who believes in the story of the Flood and Noah’s ark is also likely to believe in the adaptation of species. The message is that the wisdom of science, grounded in pagan philosophy, had either no explanation for the variation of species across geographical spans, or could only erroneously deduce that each variation had its own discrete origins. The Bible, on the other hand, is said to oblige one to believe that since all animals today originated from Noah’s ark, all the variations of species that we see “proves” that species are not fixed but can and do adapt. Within limits, of course.

The film also strongly implies that the primary debates over evolution within the scientific community are currently “raging” between those who support evolution and those who do not. Firstly the narration boldly claims that just such a debate “rages” today. The film also presents mainstream scientists who believe in evolution alongside other “doctors” and “professors” who are Christian creationists, yet without informing viewers of this distinction. Against this obfuscation it is amusing to compare the film’s consistent description of Charles Lyell as “a lawyer”, as if that disqualified him from being taken seriously as a geologist in his day!

Thus when an evolutionist (Peter Bowler) is quoted as saying that the evidence for Darwin’s theory today “stands up pretty well — with lots of additions and modifications”, another name (Cornelius Hunter) with similar academic titles is quoted to make his words sound like an indirect admission that the substantive evidence on which evolution was originally founded has since crumbled into uncertainty. The audience is left with the impression that it is the mainstream scientific community that is struggling in self-deception — evidence supposedly failing to support evolution is said to be euphemistically circuited by describing it all as “research problems” — in order to continue upholding the theory.

Mainstream scholars who are interviewed have protested that they were initially misled into appearing in a Creationist film. See their public statement in the History of Science Society Newsletter. They were unaware of the context through which their statements were being filtered and presented.

Additions and modifications are bad signs?

The film is similarly deceptive towards its viewing audience for conveying the impression that “lots of additions and modifications” to a theory represents serious foundational trouble for a theory. They are not presented with the evidence for evolution that has emerged in truckloads since Darwin. They are not, for example, informed of the predictive power of the theory of evolution and how such power establishes its superlative strength as a theory. Shubin, for example, discusses this in his recently published Your Inner Fish (to which I referred in another recent post). The similar pattern in limb bone structures across different species today, if interpreted according to evolutionary theory, means one is entitled to predict that the same structures will be found back in the fossil record in species that predated those with limbs. This is indeed the case, as with the bone structures of fins in the earliest fish. Conversely, inefficiencies in mammalian design today, such as the wastefully convoluted nerve path from the rear of the brain to the eye, for example, can be shown to be the result of gradual “stretchings” as species adapted further away from the simplest and most direct pathway in earlier marine species.

Further, although the mechanisms of the evolutionary process are debated today, this is the inevitable result of deeper understanding of cell structures and behaviours that were simply unavailable in Darwin’s time. Further explorations, discoveries and questions about processes do not undermine the substantial evidence for the fact of evolution.

The idea of “randomness” makes a solitary appearance through creationist and biochemist, Matti Leisola. To the less well informed, one would be left with the impression that evolution itself is based on the notion that all changes are random. (“We cannot change bacteria into anything other than bacteria.”) Randomness is, of course, only a part of the picture. And the creationist notion that evolution is comparable to a Jumbo jet being assembled by chance from junkyard materials is simply misinformed. (Not saying Leisola himself drew this comparison but it is common enough among creationists, and his discussion of randomness was surely enough to remind creationist audiences of such arguments.) Without further qualification I found this snippet in the film conveying yet another misleading message.

Uniformitarianism takes a heavy beating. Darwin is chastised for not taking more account of catastrophic changes that can be introduced by earthquakes or “dam bursts” from the transition from the glacial eras. But it is misleading to suggest that one must choose between the basic ideas of uniformitarianism and catastrophism. Both have played their parts in the shaping of the earth. And there can be no doubt that the former has been at work over spans of “deep time” despite punctuations of major instabilities in the earth’s crust.

Finally, The Voyage addresses Darwin’s deep conflicts over the idea of suffering in nature (from the loss of three of his own children to the wasp that lays its eggs in a living caterpillar it has paralyzed) and the notion of a good God. The film makes the point several times that Darwin was seeking to remove God from the workings of nature, as if his motivation was in some sense anti-theistic or anti-biblical. No suggestion is made in the film that his motivation could have been “pro-science”. It is a pity that the film did not take up the discussion we find in Why Darwin Matters: The Case Against Intelligent Design by Michael Shermer that Darwin made a point of avoiding public religious debate. One major reason was that he had no wish to cause personal offence to religious members of his own close family — his wife in particular.

Such a positive personal trait would have made a nice balance to the film’s readiness to elaborate on some remarks of Darwin that today are racially offensive against nonwhite races. It is also regrettable that the film neglected to point out that the modern falsification of the notion that “race” is a manifestation of core biological differences has been the work of biologists who are themselves predominantly evolutionists.

Among other reviews online are:

The Dispersal of Darwin

7 thoughts on “The Voyage That Shook the World”