Today in Singapore is a public holiday, Vesak Day. It’s a Buddhist festival. One positive about Singapore is that public holidays are officially sanctioned for each of the faiths in this multicultural city state: Buddhist (+Taoist), Christian, Moslem, Hindu (+Sikh).

I’m not a Buddhist and I shy away from its sermonizing about mind-control/thought stopping or Cognitive Behavioral Therapy (CBT) to “remove one’s mind from what might cause suffering”. Not that I’m against CBT. I’m sure it’s a great benefit to many people.

I’m not a fan of the Dalai Lama, either. I don’t like his politics and I especially don’t like his giggly way of justifying a report of poor villagers raising money for a local temple or statue when their health and lives remain at risk from a lack of basic sanitation. Nor do I keep my patience when monks pretend to be striking up a welcoming conversation only to lead the conversation to where they can try to bite me for money. But at least they do provide an alternative floor to sleep on for those who would rather not opt for the subway, so I believe.

But for all that, I do find all the colour and paraphernalia that comes with special Buddhist festivals (and even some of their less ostentatious temples) to convey a happy peacefulness and tranquility.

Sure there are the devotees who are there handing out literature. Maybe it’s my bias, but it does seem to me that they have a more laid-back attitude to their task than their Christian counterparts. These latter have generally come across to me as more intense in their desire to get you to take and read their tracts. (I cannot forget one extreme case of a Jehovah’s Witness looking frantic and fearful and crying out that God holds him accountable for my hearing his message — as I was closing the door on him. First time I ever had the guilt trip put on me in reverse in order to win me over.)

But a happy smiling Buddha, and lots of lotus flowers and tranquil pools of water and graceful statuettes is undeniably a far more positive, relaxing and happy image than the suffering figure of a crucified man. One focuses one’s thoughts on peace and wellbeing for “all sentient beings”, and the other on guilt, pain, suffering, horror, desolation, especially guilt and sin.

Is it surprising that Buddhists I know or know of seem so much more tolerant and at peace with difference, than so many Christians who, speaking generally certainly, at best, struggle with difference and “the other”?

A couple of pics from the opening night of Vesak right in the Aljunied area of Singapore — all recently set up for the coming weekend: 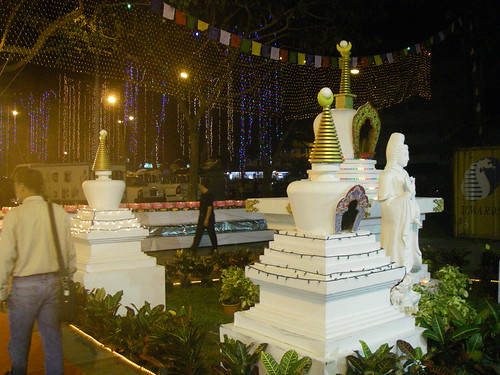 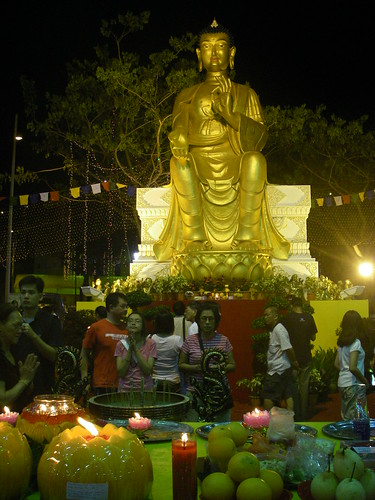 A few more, for what they’re worth, on flickr.