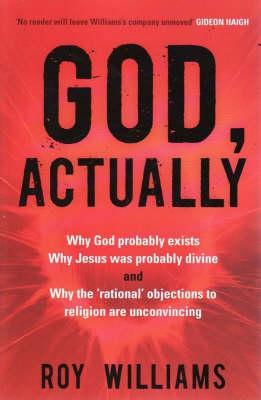 Subtitle is “Why God probably exists, Why Jesus was probably divine, and Why the ‘rational objections’ to religion are unconvincing”

When I first saw dozens of copies of this new book piled high and red near the entrance of my local ABC bookshop (Australian, not American, broadcasting) I was compelled to investigate. First thing I noticed from the back cover was that the author was a lawyer. That reminded me, worryingly, of another lawyer’s attempt to prove Christianith with “Who Moved the Stone?” That book was so riddled with logical and historical-methodological fallacies that it has left me wondering why a publisher would want to advertize that yet another apologetic book was coming once again from the same profession that had failed so dismally once before to go beyond talking to the choir.

Since my interest has been largely in the historical evidence for Christian origins I turned quickly to where Roy Williams discusses “the historical Jesus”. Unfortunately, he does not appear to engage with the critique of the normal things (the usual texts and even archaeological (sic!)) evidence for Jesus’ existence, but brushes it all aside under the collective rubric of ” G. A. Wells and others” who are merely said to strike R.M. as “too clever by half”.

A brief discussion of Michael Onfray‘s critique is included, but his main fault appears to be that his is “[t]o put it mildly . . . a minority view.” (p. 153)

Williams then proceeds to repeat the normal routine arguments for the existence of Jesus found on any fundamentalist website or that are asserted (never proved) in general Christian texts.

Much in his book is also a response to recent atheist publications by authors such as Richard Dawkins and Christopher Hitchens.

This was my first encounter with Roy William’s book, and since his arguments on the historicity so disappointed me, not engaging at all with the serious critiques against both their logic and historical methodologies, I didn’t think anything more of it. And I had little confidence in how he would have handled works by Dawkins et al given what I had seen of his treatment of this side of the argument, including the case made by Onfray.

But some months later I still see this book at many more bookshops, not only in Australia, and so I had another look. I even went so far as to break my promise not to bother to buy a copy.

So here I have it, and only need time to read it more completely (alongside many others on my list) and I hope I can respond in some detail to some of the points made in this book — if only for Australian lay audiences who may not so familiar with much of the scholarship and serious critiques of Jesus’ historicity as others in the home countries of Europe and North America where much of the debate and publishing on these topics takes place.

Will try to get to continuing with this and other posts in coming months.

Meanwhile, to comment on one specific argument I read while resting in the Singapore heat and humidity yesterday:

Why God cannot allow Children to avoid an early death

Imagine a world in which, say, no one could di before the age of twelve; a world in which a supposedly more loving God ‘spared the innocent’, at least for a fixed time. Would that be a better world? No. The possibility that such a world could work satisfactorily really does not hold up for a moment. Children at a certain age would be known to be indestructible, and with what results? Parents would not care for them so painstakingly, nor love them with such protective tenderness, all kinds of monstrous evils (short of death) would be all the more likely to be visited upon them, by their parents and by others. (p.220)

Fact: Anthropologists know all too well, and it has been a fact of history since history began, that there have been many cultures where a parent (especially a father) is less likely to care for a child until it has survived past a certain age and has proven itself more likely to be a candidate for long-term survival!

It is the prevalence of early death to so many children throughout so much of human existence that has been a factor in withdrawal of deep parental love. Many parents have too often sought to avoid the pain of emotional attachment and the wasted time and energy on a child until they can be sure it will survive in the long term.

It is the evil of the fact of too much early death that has bred this evil.

Parents don’t love a child, or do so “painstakingly” or with “such protective tenderness” because of the fear they might otherwise die, but because they are a part and extension and fruit of their own very selves, and for whom they naturally wish all the best in the world, for the sake of a happy life both now and in the future.

Allen & Unwin blurb of this book.

ABC publisher blurb of this

(let no one say i don’t give the other side a good chance to be heard! 😉