Continuing from the previous post on this topic . . . . . (discussing Levenson’s Death and Resurrection of the Beloved Son . . . 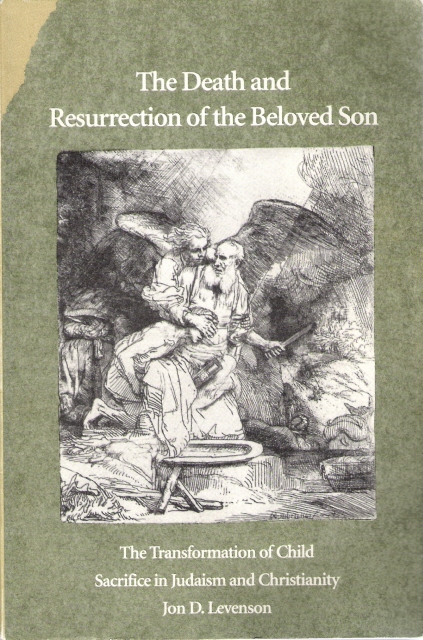 The Saving Blood of Isaac

If the Book of Jubilees is evidence that Jewish interpreters of the Genesis story of Abraham’s offering of Isaac implied an identification of Isaac with the Passover lamb, later rabbis made the identification unambiguously explicit. The Mekilta de-Rabbi Ishmael, redacted around the 4th century c.e., discusses the Exodus Passover passage, Exod 12:13b:

“When I see the blood [of the paschal lamb] I will pass over you, so that no plague will destroy you when I strike the land of Egypt”:

According to this midrash it is the blood of Isaac that saves Israel. The paschal lamb is merely a reminder of Isaac’s blood. It is Isaac’s blood that delivers Israel from Egypt. Further, the same midrash interprets the blood of Isaac as saving Jerusalem from the plague in the time of David. Not only saving Jerusalem, but it was seen on the spot where the Temple was to be built. Hence the blood of Isaac — Abraham offering Isaac — is even set on the site of the Jerusalem Temple. (This interpretation may seem obscure, but Levenson discusses the rationale in the above passage. In brief, it is related to the oddly missing object of the verb “saw” — which enables the rabbi to link the passage back to the aqedah.)

So in the aqedah (Abraham’s offering of Isaac), in the Exodus Passover, and in the plague sent on Jerusalem in the time of David, God halts a slaughter — in the first and last cases, at the very last moment. He does so because of the blood of Isaac, of which the Passover lamb is a reminder.

Same rabbinic texts apparently argued that Abraham had actually shed some of Isaac’s blood, and God stopped him from going all the way with slitting his throat by a very! last minute call. It is also possible the author or redactor of the above text was thinking of the blood of Isaac as being as good as actually shed because it was clear that Abraham intended to do this. It does not really matter how the rabbis understood the mechanics of the meaning. The meaning and salvific effect of the blood of Isaac remains.

Genesis 22 is traditionally read in synagogues on Rosh Hashanah (the 7th month). The Exodus Rabbah 15:11 declares that Isaac was both born and later bound in the same month as Israel was delivered from Egypt — the first month, the month of Passover. This same month is also to be regarded by Jews as the ongoing month of their spiritual liberation. Isaac is being seen as “an archetype of redemption and thus a foreshadowing of the eschatological deliverance, the new Exodus.” (p.183)

b. Rosh Hashanah 16a claims to cite a third century c.e. rabbi, Abbahu, who linked the binding of Isaac with Rosh Hashanah. But what is more interesting here is that this festival was celebrated, so that God

may remember for your benefit the binding of Isaac, son of Abraham, and account it to you as if you had bound yourselves before me.

Acts of self-sacrifice are here being understood as done in imitation of Isaac. Jews’ hope for forgiveness is linked to imitating Isaac in being bound for sacrifice.

Another rabbinic text directly explained that not just the Passover lamb, but all sacrificial lambs, were a symbol of Isaac:

Immediately [after Abraham provided the meal to his visitors] it was an­nounced about Sarah that she would give birth to Isaac. After this [i.e., Isaac’s birth], the lamb was chosen in order to recall the merit of the special [yehida’=”special”, “favoured”, “only” son] man who was bound on one of the mountains like a lamb as a burnt offering upon the altar. [God] redeemed him in his goodness and mercy, and when his descendants shall pray, they shall say in their time of distress, “Answer us at this time and listen to the cry of our prayer and remember for our benefit the binding of Isaac our father.” (Targum Neofiti to Lev 22:27)

And the twice daily sacrifice was itself a reminder of the binding of Isaac:

In the case of a ram, it says, “[It shall be slaughtered] on the north side [of the altar] in the presence of the LoRD” [Lev 1:11]. They said: When our father Abraham bound Isaac his son, the Holy One (blessed be he) established the institution of the two lambs, one in the morning and one in the evening. Why so much? Because when Israel would sacrifice the daily offering on the altar and recite this verse (“on the north side in the presence of the Lord”), the Holy One (blessed by he) would remember the binding of Isaac.

The Salvation for all through the sacrifice of prayer

Rabbinic literature attached deep significance to the prayers that had to be uttered with the animal sacrifices that had come to an end with the destruction of Jerusalem.

In the Leviticus Rabbah extract above, the prayer to be recited spoke of “the north side in the presence of the Lord”. The original Hebrew lacked vowel indicators, and in the word for “north” one can also read the root of the word for “hide or store away” (spn).

The aqedah is apparently understood as being “hidden away in the presence of God” but brought out for reminder by the sacrifice of the lamb — and the accompanying recitation of this verse.

And this blessing is not only for Jews, but for all races:

. . . . Whenever anyone — ­Gentile or Jew, man or woman, male or female slave, reads this verse (“on the north side/hidden away in the presence of the LORD”), the Holy One (blessed be he) remembers the binding of Isaac . . . .

The classic Shemoneh ‘Esreh prayer was said to have originated, reportedly according to a third century c.e. rabbi, to correspond with the daily offerings (b. Berakot 26b).

Levenson sees an interesting common matrix for both the Christian Eucharist (as typified today by the Catholic mass with its emphasis on intertwined prayer and sacrificial meal) and the Jewish Shemoneh Esreh. Both grew out of the practice of Jewish sacrifices and both owe a lot to post-biblical [“Old Testament”] Jewish exegesis.

One thought on “The offering of Isaac: its evolution into the template of the Jesus event: 2”