I’m posting here just one more detail from Barry Henaut’s disagreement with Werner Kelber’s argument that our earliest gospel, the Gospel of Mark, originated as an attempt to capture stories that came to the author via oral traditions. After this we will dive more deeply into the question of oral traditions being the source of the canonical narratives. All posts in this series are archived here.

Kelber confidently assures us that there can be little doubt that oral heritage lies behind the short stories that are stitched together in the first thirteen chapters of Mark to give us a life of Jesus.

The many stories are linked together by stereotypical connective devices:

These connectives are for the most part derived from the oral repertoire of the gospel’s primary building blocks. (Kelber, The Oral and Written Gospel, p. 65, formatting and bolding mine in all quotes)

These connectives serve to link the different stories into a chronological sequence and build a sense of urgency as the narrative proceeds. END_OF_DOCUMENT_TOKEN_TO_BE_REPLACED 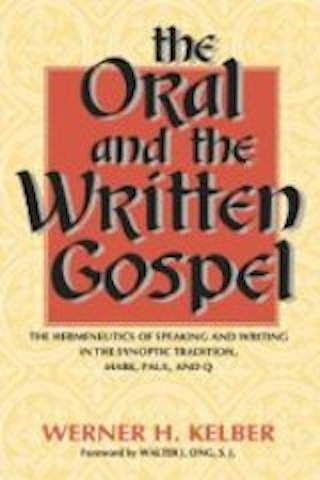 There are three distinctive features about parables that Kelber identifies as clear signs that they originated as oral performances. END_OF_DOCUMENT_TOKEN_TO_BE_REPLACED

This post continues with the series on Barry W. Henaut’s Oral Tradition and the Gospels, a critique of the assumption that oral traditions lie behind the gospel narratives. I have added to Henaut’s case more extensive quotations from works he is criticizing so we can have a better appreciation of both sides of the question.

This sounds logical enough, and Kelber points to studies by W. J. Ong, E. Havelock and A. B. Lord (links are to the relevant works online or information about the works) to establish his point that oral communicators tend to group similar types of material for easier recall.

But such oral grouping of sayings brings with it a casualty when an author attempts to put it all in writing. An easy flowing chronological tale is easily lost. This is what lies behind the monotonous use of “and” (kai) in Mark as tale after tale is strung together with little carefully arranged narrative structure (so argues Kelber). It also explains

Kelber classifies the various stories in the Gospel of Mark into Heroic Tales, Polarization Stories and Didactic Stories. The distinctive patterns in each of these types, and the way these types are clustered together, he argues, testifies to them being derived from oral sources.

END_OF_DOCUMENT_TOKEN_TO_BE_REPLACED

We move on now to Henaut’s discussion of another landmark scholar in the field of oral vis à vis textual gospel studies, Werner Kelber. Kelber raised serious questions about the models that had been proposed by Bultmann and Gerhardsson who were discussed in the earlier posts. (Bultmann and Gerhardsson had argued that sayings of Jesus had a particular Sitz im Leben (each saying had its own particular social setting) and that communities were repositories of oral traditions and safeguarding their long-term consistency. END_OF_DOCUMENT_TOKEN_TO_BE_REPLACED

My last post in this series ended with Thomas Brodie’s question:

On what basis, then, is it possible to go on claiming oral tradition?

Brodie asked this after surveying how Hermann Gunkel’s paradigm of oral tradition came to dominate biblical, and especially New Testament, studies, while at the same time pointing out the logical fallacies and cultural prejudices that served as its foundation.

This post continues with Brodie’s responses to more recent arguments attempting to shore up the case that the Gospel narratives were preceded by their counterparts in oral traditions. They are taken from chapter 6 of his book The Birthing of the New Testament. (Before doing a post like this in the past I would often take time to read for myself the scholars being discussed so I could present their arguments independently and comment on, say, Brodie’s assessment of them. Unfortunately my circumstances at the moment do not permit that — otherwise I would never get to completing this post at all. So keep in mind that what follows are my presentations of Brodie’s summaries of the arguments of others.)

that ancient writing was particularly influenced by oral culture and rhythms (1992:30-31).

Brodie agrees. Ancient writing was so influenced. But he also notes that Kelber fails to take into account that all ancient writing “reflects the rhythms of oral speech.”

That does not prove that all authors depended on oral tradition; it simply means they wrote for the ear rather than the eye. (p. 55)

Recall in my previous post I paraphrased Brodie’s point here:

Ancient writing was largely governed by rhetoric. Rhetoric, the art of speaking, also became the art of writing. Writing was geared to oral communication. It was composed for the ear.

In this sense all ancient literature is oral, including the Greco-Roman classics and the Bible. (p. 52)

All Kelber is identifying, then, are the signs that the gospels, like all ancient literature, are dependent upon orality with respect to their form and thought pattern. END_OF_DOCUMENT_TOKEN_TO_BE_REPLACED