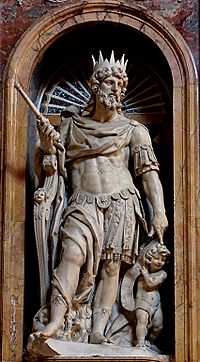 Lemche & Thompson begin this discussion by stating what they see as the first problem for deciding the correct meaning of the key word in the stele: END_OF_DOCUMENT_TOKEN_TO_BE_REPLACED

This post outlines the arguments of George Athas on the famous “House of David” lexeme that appears in the published version of his 1999 doctoral dissertation, The Tel Dan Inscription: A Reappraisal and a New Interpretation (2003).

Athas believes that the critical word often translated as House of David is in fact a geographical place-name and probably a reference to Jerusalem. I will cover Athas’s historical commentary in which he discusses the relevance of the expression as evidence for a historical Davidic dynasty in a future post. I have not covered every detail of Athas’ comments, omitting some subordinate arguments such as a proposed translation that introduces a cookhouse into the inscription, or where an argument against a particular amended text in Amos 8:14 is rejected because it breaks the parallelism in the verse.  On the other hand, I have expanded some details, such as journal names and biblical quotations. Do let me know if you notice any errors in the Hebrew/Aramaic letters. The Tel Dan is an Aramaic inscription.

To begin with, here is a translation by George Athas of fragment A in which the apparent “House of David” appears, along with line numbering:

There are two fragments, A and B. Athas discusses the evidence for placing the B fragment below fragment A (e.g. the evidence that the scribe did not have to stretch when engraving B as he did with the letters in A, and the breakdown of the text’s alignment if B is placed alongside A). This changes how scholars interpret the possible overall message on the monument, but does not affect the meaning of the apparent “House of David” reference.

Biran and Naveh first proposed the theory that this should be interpreted as “House of David” – that is, referring to the “dynastic name of the kingdom of Judah”. (‘An Aramaic Stele Fragment from Tel Dan’, Israel Exploration Journal 43 (1993), pp. 81-98. END_OF_DOCUMENT_TOKEN_TO_BE_REPLACED

The quaint Latin term might mean appeal to modesty but in plain English it refers to the fallacy of an appeal to authority.

This form of error is an egregious but effective technique which puts an opponent in the awkward position of appearing to commit the sin of pride if he persists in his opposition. (p.253)

Fischer (Historians’ Fallacies) discusses a 1950’s exchange among historians of modern history to illustrate that “the most crude and ugly form of an argument ad verecundiam in historical writing is an appeal to professional status.” I will cite here a more recent example.

In 2003 George Athas published a version of his 1999 doctoral thesis on the Tel Dan inscription — a 1993 archaeological find that was widely claimed to be the earliest extra-biblical evidence for the House of David. Two of the earliest reviews of this work were “most crude and ugly” indeed:

The authors hope is that his study will do much to quell the unhelpful passion and euphoria that have lured us all into emotional scholarship (319). Those are rather grand and pretentious aims for a doctoral dissertation . . . (Review in RBL 10/2003) by William M. Schniedewind University of California)

And a year later:

. . . . After a decade of extensive research, there was a feeling among scholars that the study of the inscription had reached fruition and that no significant advance could be made, unless more fragments were found in the excavations.

It is against this background that the book under review should be evaluated. The book, a rework of a dissertation submitted to the University of Sydney in 1999, deals with some aspects (notably the epigraphical, paleographical, and textual analysis) in such detail as could be done only in a doctoral dissertation. Considering that Athas is a beginning young scholar, the book is pretentious in the extreme. Athas believes that his study will do much to quell the unhelpful passion and euphoria that the Tel Dan Inscription has evoked among scholars and interested persons alike (319). — (Review in RBL 10/2004 by Nadav Naaman, Tel Aviv University)

There are many reasons . . . to believe that Acts was composed [as] a later reaction against Marcionism.

No more, just an invitation to discuss the evidence if my debating partner was willing to go there. But his reply was an interesting shut down with his appeal to “modesty” and by inference “my arrogance” for even making such a claim:

That might be a fun debate. … {g} You do realize that such a position (about Acts) goes directly up against evaluations by Adoph Von Harnack and JAT Robertson (among many others on all sides of the theological spectrum, some of them no more poster-boys for Christian “dogmatism” than those two were), right?

In other words, my correspondent was demonstrating a complete lack of interest in what “many reasons” there might possibly be, preferring instead to rest on the works generally cited as authorities. Authority of the names alone was sufficient. The question was recast from one of evidence and reason to one of attitude: of presumed modesty versus a presumption of arrogance.

One might even call it an attempt at “intellectual bullying”.

A favourite arena where this tactic is found is where individuals outside the academy raise questions or challenge paradigms that have long been seen as the special preserve of the academy. Obviously some of those questions and alternate proposals are kooky. But academia does itself — nor the public to whom one would expect it to feel some sense of responsibility — any favours by arrogant appeals “to modesty”.

In historiography, such crude forms of argument ad verecundiam are rarely to be met with — in print, at least. [He was writing in 1970 — before online discussion groups and wikis.] The explanation is not that scholars are gentlemen, but rather, as Bolingbroke noted many years ago, that “those who are not such, however, have taken care to appear such in their writings.”

The above examples demonstrate that Fischer’s observations do not necessarily apply in our times of public online journal reviews and discussions.

there exists online another review of Athas’s study sans the “modesty” by Daniel Miller (2007) in the Journal of Hebrew Scriptures.