This post continues with a discussion (begun here) of Nancy Fraser’s analysis,

I like to think in images so have prepared a few for this post. If you find them confusing then stick with the words. If they’re confusing then read the original article linked above.

Here is the essence of the previous post. The hegemon of the “progressive neoliberal bloc” is the “most dynamic, high-end “symbolic” and financial sectors of the U.S. economy”. It maintains its power by persuading the lower and middle classes that its values are the “common sense” view of the world. Gender and racial equality, for example, are promised to become the conditions for economic fairness and prosperity for all. That this message is a myth hiding a darker reality for most people was explained in the previous post.

This segment of economic rulers promoted the values of feminism, antiracism, etc, promising a more prosperous society for all but in fact delivering what was the inevitable result of their economic goals. They promised that progressive values were in sync with the new economy of deregulation and that everyone would prosper from deregulation all round. See the previous post for details. The reality was different, though, as per the diagram that shows the “values of recognition” on the left and the results of the other set of values, those of “distribution of wealth” on the right. 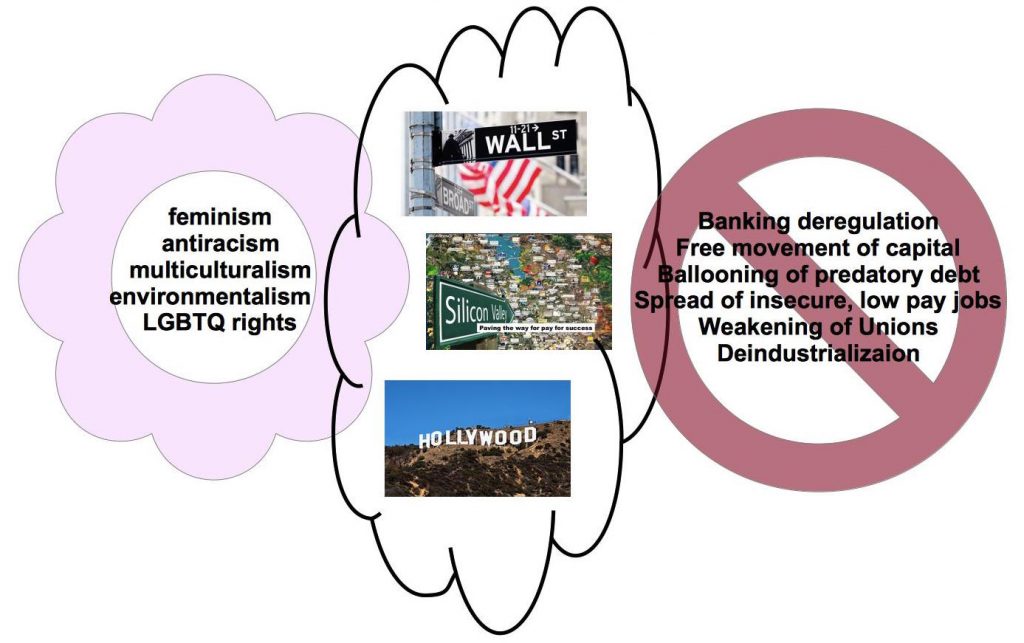 These were the winners under first Reagan, then especially under Clinton and Obama.

But there is always a but. Another sector of economic rulers, those who found the Republican Party to be more supportive of their interests, were not so coherent in their presentations at the time. They had pretty much the same values of distribution of wealth as the “progressive liberals” but a different set of values of recognition, or esteem, of who was worthy and deserving of recognition. Nancy Fraser calls these the “regressive neoliberals”.

Sectoral emphases aside, on the big questions of political economy, reactionary neoliberalism did not substantially differ from its progressive-neoliberal rival. Granted, the two parties argued some about “taxes on the rich,” with the Democrats usually caving. But both blocs supported “free trade,” low corporate taxes, curtailed labor rights, the primacy of shareholder interest, winner-takes- all compensation, and financial deregulation. Both blocs elected leaders who sought “grand bargains” aimed at cutting entitlements.

But the “regressive neoliberals” appealed to a different voting bloc. Their primary make-up consisted of the financial sector, the military manufacturing and extractive energy industries. But they usually spoke not directly as the weapons and oil and coal industries, but as supporters of “small business and manufacturing”. That front was far more appealing to a wider constituency. And as for their “recognition values”, these appealed to

Nancy Fraser does not see the above constituency as necessarily natural allies with “libertarians, Tea Partiers, the Chamber of Commerce, and the Koch brothers, plus a smattering of bankers, real-estate tycoons, energy moguls, venture capitalists, and hedge-fund speculators”, but seems to think that the fact that they are all “bundled together” is, by and large, an “uneasy” alliance for now. In other words, Fraser sees hope for shifting the affections of the above four groups (evangelicals, southern whites, disaffected working class and small town Americans) into a more positive populist movement. But that’s getting way ahead of ourselves at this point in the discussion. 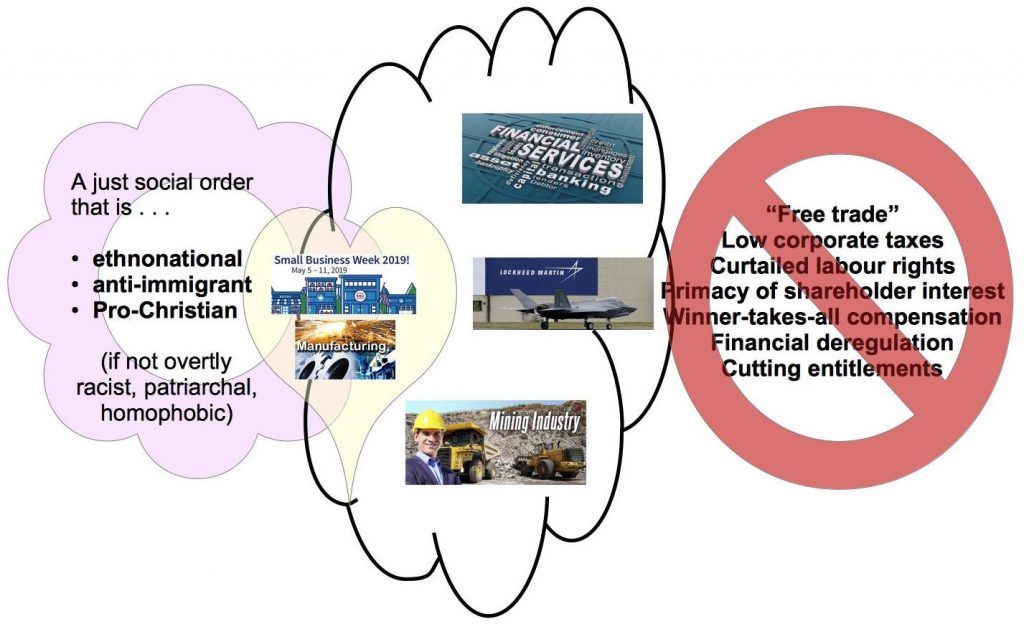 (The racism is, of course, flatly denied by most. See Strategies of Denial of Racism.)

Consequences of neoliberal politics (from Reagan to …)

I was about to conclude that heading with “Obama”, but then remembered that Trump himself has done a complete about face since his election and fully implemented (or simply allowed it to continue with even fewer restrictions) the neoliberal program himself.

Here is Fraser’s summary of the consequences:

Decaying manufacturing centers, especially the so-called Rust Belt, were sacrificed. That region, along with newer industrial centers in the South, took a major hit thanks to a triad of Bill Clinton’s policies: NAFTA, the accession of China to the WTO (justified, in part, as promoting democracy), and the repeal of Glass-Steagall. Together, those policies and their successors ravaged communities that had relied on manufacturing. In the course of two decades of progressive neoliberal hegemony, neither of the two major blocs made any serious effort to support those communities. To the neoliberals, their economies were uncompetitive and should be subject to “market correction.” To the progressives, their cultures were stuck in the past, tied to obsolete, parochial values that would soon disappear in a new cosmopolitan dispensation. On neither ground—distribution or recognition—could progressive neoliberals find any reason to defend Rust Belt and southern manufacturing communities. (my emphasis)

Thus far we have set out the scenario that is to usher in Trump.

I have belatedly caught up with some of Nancy Fraser‘s analysis of the current worldwide political condition that has seen Trump in the US and a rise in ethnocentric and authoritarian movements worldwide and I’d like to try to set out her ideas over a few posts here as I find opportunity. Above all, I’d like to try to simplify Nancy Fraser’s articles that come across to me at an overly high conceptual level. (If anything in this series of posts is not clear or accurate then I expect to be called to account.) Gramsci was criticized (while also being highly honoured) by Noam Chomsky for his obscure intellectual jargon. Given that Fraser acknowledges a debt to Gramsci it may not be surprising that she also writes above the level of everyday language that is always clear to all. I think Fraser’s analysis is correct, or at least among the most explanatory that I have heard for making sense of the situation of the world today and how someone like Trump is where he is now. These posts will be extracted from the points made by Nancy Fraser in . . .

The crisis is global

The above changes all share one thing in common:

All involve a dramatic weakening, if not a simple breakdown, of the authority of the established political classes and political parties. It is as if masses of people throughout the world had stopped believing in the reigning common sense that underpinned political domination for the last several decades. It is as if they had lost confidence in the bona fides of the elites and were searching for new ideologies, organizations, and leadership. Given the scale of the breakdown, it’s unlikely that this is a coincidence. Let us assume, accordingly, that we face a global political crisis.

So it is fair to look for something that is happening on a global scale to explain the above retrograde shifts.

And it’s not just political. It involves serious ecological, social and economic stresses. Some of the major challenges within the US have been

It’s about time the above stresses had a serious impact on the politics of countries where they are found together. And we have seen the first political “blowback” of these stresses in the U.S. with the rise of Trump.

But how was it, exactly, out of all of the above, that the Trump presidency came about?

How the ruling class rules

Nancy Fraser’s perspective builds on the concept of hegemony as developed by Antonio Gramsci, an Italian Marxist who died in a Mussolini prison. Put simply, hopefully not too simply, the idea of hegemony is that a ruling class needs to make its worldview and values the worldview and values of the groups it dominates. Simply controlling the wealth and all the businesses and factories etc is not enough to maintain control. The subordinate classes must accept the belief systems of their rulers for the system to work smoothly. The ruled must accept that their world and their place in it is only natural and commonsensical. The term hegemony implies ruling by attaining the willing consent of the lesser powers. If there is consent then what is the problem? Read on to see.

Fraser identifies two types of common sense values that the upper classes expect those they dominate to accept:

In other words, the owners of the wealth, or the owners of all the businesses that produce that wealth (mining companies, service industries, etc) must form an “ideological” or “belief system” bond with those they wish to rule. Their position of power would not be very secure otherwise.

Leaders of a certain sector of the U.S. economy positioned themselves as promoters of human rights. The “most dynamic, high-end “symbolic” and financial sectors of the U.S. economy” — Wall Street, Silicon Valley, and Hollywood — embraced the values of feminism, antiracism, multiculturalism, environmentalism, and LGBTQ rights that had been emerging out of progressive liberal activist movements from the 1960s and 70s. These values served the interests of both classes: “Sure, we believe in equal opportunity rights for women, blacks, gays — we want the very best talent from any quarter to get to the top and make the most of their (not to mention our corporate) potential” (my paraphrase).

Anyone who was capable of doing a job should be given the opportunity to do that job regardless of their race, gender, etc. It was a subtle form of meritocracy to see who was worthy of class advancement.

And that ideal was inherently class specific: geared to ensuring that “deserving” individuals from “underrepresented groups” could attain positions and pay on a par with the straight white men of their own class.

The progressive-neoliberal bloc combined an expropriative, plutocratic economic program with a liberal-meritocratic politics of recognition.

Here is where the Left divided. Large sectors of the Left were seduced into supporting the other set of values (concerning distribution of wealth) of those economic leaders. END_OF_DOCUMENT_TOKEN_TO_BE_REPLACED