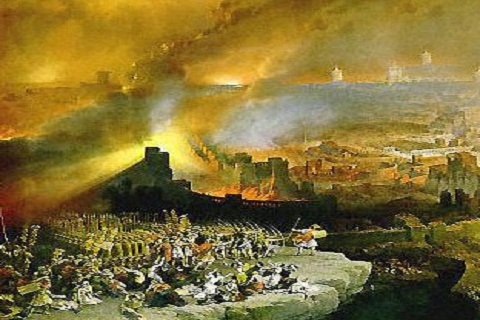 END_OF_DOCUMENT_TOKEN_TO_BE_REPLACED

This post is the sequel to Did Josephus Fabricate the Origins of the Jewish Rebellion Against Rome? It is my take on Professor James S. McLaren’s chapter, “Constructing Judaean History in the Diaspora: Josephus’s Accounts of Judas” in Negotiating Diaspora: Jewish Strategies in the Roman Empire.

In the previous post we covered McLaren’s analysis of the contexts, style and contents of the respective references to Judas the Galilean in both Wars (written shortly after the fall of Jerusalem in 70 CE) and Antiquities (completed some twenty years later).

McLaren’s next step is to assess the situation (both geographical and socio-political) of the author of these references.

When the war broke out Josephus was in Jerusalem. He was in a position to have a fair idea of what was going on. The war itself was initiated by the priests of Jerusalem refusing to sacrifice to the Roman emperor.

25. The view that it was Jerusalem-based aristocratic priests who were instrumental in starting and leading the revolt concurs with the general picture of ‘native’ revolts in the Roman Empire (Dyson 1975 = “Native Revolt Patterns in the Roman Empire”, ANRW II.3: 138-175). The silver coinage issued in the first year of the revolt helps confirm the crucial role of priests in instigating and leading the revolt. See McLaren 2003 = “The Coinage of the First Year as a Point of Reference for the Jewish Revolt (66-70 CE)”, Scripta Classica Israelica 23:135-52.

It was the priests who were among the prime movers at the start of the war when they ceased offering sacrifices on behalf of Rome and the emperor, not nameless revolutionaries or insurgents. Josephus should be placed among these priests who publicly rejected Roman rule in 66 CE. He, therefore, went to Galilee, the likely direction from which the Romans would attack, as an active rebel leader commissioned by those in Jerusalem who had decided to defy Rome.25 (101)

McLaren insists that Josephus himself was one of the rebels who initiated the break with Rome. In 66 CE he was not a moderate trying to soothe ruffled feathers or a reluctant participant.

26. Obviously there are pitfalls with any interpretation that incorporates an argument from silence. However, given that the only eyewitness account is trying to suppress what actually happened, the absence of direct evidence is no surprise. If anything, what could be seen as most puzzling is why there is any reference to the war cry at all; surely no mention at all would be better. Clearly that would be one way of dealing with the problem, unless others were still alive who could counter the oversight with their own version, especially as Josephus had no guarantee that his would be the only account written. Another approach would be to find a scapegoat, as suggested here.

The key contention is that Josephus and his fellow rebel priests advocated rebellion against Roman authority, using as a rallying-point the claim of ‘God alone as master’. No direct evidence for this view remains in the War account of 66. It has been deliberately edited out of 66 CE and the war cry has been relocated to another time, group and place, namely, Judas from Galilee and the supposed fourth philosophy.26 (102)

McLaren argues that the conflict sprang up quickly. It was not apparently an eventual eruption that had been building up through pressures for decades prior. Human folly of the moment was more likely the culprit.

That coins were minted to mark the beginning of the revolt and the decision to stop sacrifices for Rome are strong indications that the Temple establishment was a principal actor. The symbols and inscriptions on the coins and Josephus’s discussions elsewhere (especially in Apion) point to the priests leading the revolt under with the ideological belief in the rightness of God’s rulership through his priests. Josephus, after the war as a de facto captive in Rome, transferred the slogan to a group as far from himself and his associates as possible. Josephus needed to justify the mercy shown to him in allowing him to live and prosper anew in the city of his nation’s destroyers so his the former ideological rallying cry of “no master but God” had to be sloughed off and planted on others.

END_OF_DOCUMENT_TOKEN_TO_BE_REPLACED

Josephus lays the blame for the Jewish rebel movement squarely on the shoulders of Judas the Galilean who led some sort of movement to oppose Roman taxes around the time of the infancy of Jesus — 6 CE. From this Judas arose what Josephus labels the “Fourth Philosophy”. The other three were the Pharisees, the Sadducees and the Essenes. The Fourth Philosophy is depicted as an undesirable conglomeration of upstart rebels who brought down ruin upon their nation.

Recently I was posting about my doubts concerning the evidence for Jewish messianic movements prior to the First Jewish War (66-73 CE) and Giuseppe alerted us to a study by James S. McLaren in Negotiating Diaspora: Jewish Strategies in the Roman Empire. McLaren’s chapter is “Constructing Judaean History in the Diaspora: Josephus’s Accounts of Judas“, pages 90-107. Thanks, Giuseppe. Until I read that chapter I never quite knew what to make of Judas the Galilean because though scholars often say he led the first military rebellion against Rome I have not been able to find unambiguous evidence for that claim in Josephus. It seemed some historians were simply repeating the hearsay of their guild. Hence I have held back from commenting on him when I have discussed other rebels and bandits on the Judean stage either side of the time of Jesus. McLaren’s chapter is the first work I have read that squarely confronts and addresses the ambiguities and inconsistencies that have bothered me in Josephus’s account.

Conclusion: Josephus created Judas the Galilean as a foil to bear the responsibility for the humiliation of the Jewish defeat. I’m not saying that Judas did not exist (though he may not have) but that Josephus has been forced to modify his account with each retelling of his role in starting the rebellion. These variations indicate that Josephus is creatively rewriting history to deflect blame for the war from his own class of aristocratic priests.

This study shows that we can no longer assume that this Judas presented by Josephus is an historical figure who engaged in some activity in 6 CE. It is not simply a case of claiming that Josephus may have exaggerated the account of Judas’s career and its impact by adjusting a few details here and there. Rather, Josephus’s apologetic has constructed Judas, making him a vital part of the explanation of what happened in Judaea in 66-70 CE. Who he was, what he did and what he advocated, if anything at all, need to be established afresh, outside the framework provided in War and Antiquities. (108: bolded emphasis is mine in all quotations)

Now McLaren is working like a real historian — a welcome change from some of the tendentious works we have discussed elsewhere. He examines the nature of his source material before deciding to take its claims at face value — and that means literary analysis . . .

This discussion will be presented in three parts. In the first, I offer an analysis of the textual location of the references to Judas.

and study of provenance:

The second part will be devoted to a reassessment of the geographical and socio-political location of Josephus in 66 CE and in the years that followed the revolt. The third and final part will outline how these locations result in Judas being presented as a scapegoat by Josephus.

Further, he understands the necessity of evidence external to his source material for corroboration.

Who he was, what he did and what he advocated, if anything at all, need to be established afresh, outside the framework provided in War and Antiquities.

These are the methodological principles I have been saying ought to be applied to the gospels even if the result might lead to the conclusion that a central character has possibly been a creation of the author rather than a true historical figure. I notice that McLaren’s background is strong in ancient history and not restricted to biblical studies.

So what are McLaren’s arguments? I’ll take them in the same order as McLaren with this post covering McLaren’s analysis of the respective locations of Josephus’s references to Judas.

Warning: the following post is for those with a serious interest in the question of Josephus as a historical source. END_OF_DOCUMENT_TOKEN_TO_BE_REPLACED