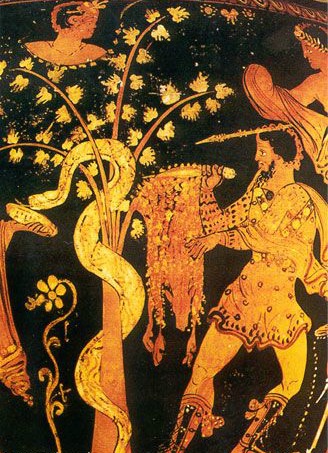 Peter is not a semi-divine being as Medea is (she is a granddaughter of the sun god Helios and has magic powers) so he needs an angel to help him out when it is his cue to enter this Hellenestic adventure motif of fleeing for his life, past guards unseen, with doors opening of their own accord: END_OF_DOCUMENT_TOKEN_TO_BE_REPLACED

Renewed beginning at the climax END_OF_DOCUMENT_TOKEN_TO_BE_REPLACED

Continuing here my commentary on the points of literary, thematic, religious and cultural contacts between ancient popular literature and the Bible, with the Argonautica as a case study. [See the other posts in this series.]

Anyone who treats the Bible too seriously as history needs to take time out to read Jason and the Argonauts, or the Argonautica, composed in the third century BCE by Apollonius of Rhodes.  They could also read a lot of other ancient literature, epic poetry, tragic dramas, Hellenistic novellas, to find a more grounded perspective for the Bible as literature, but here I focus on the Argonautica.

Book 2 — this links to Seaton’s translation of the second of the four books of the Argonautica. (The “chapters” in my titles are only for convenience to follow the sequence of posts on the blog and are not part of any formal numbering system.)

The Dual, the Prophecy, the Parting Rocks, and Seeing the Glory of God

END_OF_DOCUMENT_TOKEN_TO_BE_REPLACED

Continuing the story in Book 1 (links to Seaton’s translation) of the Argonautica. It is one of many ancient works of literature that deserve to be read alongside the Bible to keep everything in perspective. [This is the second part of my little series of posts reading the Bible in the context of popular ancient fiction, specifically with the Argonautica.]

Before embarking on their quest for the golden fleece, the leader of the expedition, Jason, utters a lengthy prayer to Apollo, the god of his fathers. His prayer reminds Apollo of promises the god made to him in the past, seeks protection, offers devotion, and announces that all will be done for the god’s glory. Following the prayer a number of sacrifices are offered. In their wake, one of the crew, Idmon, pronounced a prophecy declaring final success for the mission, but only through many trials and tribulations, including death for himself. The crew listened with mixed feelings, rejoicing in the promise of eventual success, but mournful at the fate of Idmon.

Jason’s prayer is matched by Solomon’s prayer at the inauguration of the Temple and the beginning of the new era for Israel under God. God is reminded of his promises, protection is sought, and God’s name is to be glorified. At the Amen, the sacrifices begin. But with the prayer are hints that not all will be well. Readers are reminded of the history of failure of Israel. There are many such prayers throughout the Bible. Jesus prays for the safety of his followers, conceding that one must be lost according to the divine pre-ordained will. All prayers acknowledge the necessity that the godly must suffer severe trials before they reach their final reward.

The leader sets himself apart, and is challenged, but music restores the calm

The crew, the argonauts, quickly forget the sober moment when evening falls and it is time to rest, tell stories and feast with wine. Their leader Jason, however, cannot share with them their carefree spirits. He is too burdened with the full awareness of the dangers ahead, and his responsibility of leading them all safely. Like Homer’s Odysseus before him when he knew too well the dangers that faced his crew, and who likewise left them in their carefree state of mind to go off alone to pray, Jason withdrew himself. END_OF_DOCUMENT_TOKEN_TO_BE_REPLACED

Anyone who treats the Bible too seriously as history needs to take time out to read Jason and the Argonauts, or the Argonautica, composed in the third century BCE by Apollonius of Rhodes.  They could also read a lot of other ancient literature, epic poetry, tragic dramas, Hellenistic novellas, to find a more grounded perspective for the Bible as literature, but here I focus on the Argonautica.

Book 1 — this links to Seaton’s translation of the first of the four books of the Argonautica.

It opens with a prophecy that sets the action in motion. King Pelias had been warned that he would be murdered at the behest of a man he saw approaching with one sandal. It just so happened that Jason happened to have lost one sandal while crossing muddy waters when he came to King Pelias to enjoy a banquet. Pelias could hardly kill him on the spot for losing his sandal, so sent him on a mission (to a distant land to retrieve a golden fleece) from which he believed he could scarcely return.

So begins the action. And it is not just an ordinary adventure of ordinary folk. It is to be a tale of famous deeds by some of the most renowned of ancient heroic names. And the plot is driven by prophecies from the gods and their agents. This is the stuff of ancient epics, dramas and novellas. END_OF_DOCUMENT_TOKEN_TO_BE_REPLACED