Literary allusions and influences are generally not about one-to-one correspondences of plot or character details. Authors are for most part motivated to write something new, something that interests them and their audiences, and that means drawing upon familiar written and oral words and weaving them into new creations. Perhaps a good comparison could be drawn from those music programs that trace the history of certain genres of music through the decades. One soon learns that even “the new and different” is really a re-mix of the old from here, there and somewhere else that has been repackaged and presented in a very new way.

Nor does the fact of literary allusion of itself suggest that the topic being written about is fiction. One is quite entitled to write a history of a modern event and draw on allusions from Shakespeare or Homer in the process. Where the line is crossed is where the entire narrative can be most simply explained in terms of literary allusions and ideological interests. Whether that line is crossed is the case with Paul before the Areopagus I do not know. I have not taken the time to give it proper consideration. But surely Lynn Kauppi’s discussion is one part of the discussion that cannot be ignored. (Nor am I suggesting that Kauppi himself rejects the historicity of Acts 17. I have no idea if he does or not and his thesis I am addressing here does not allow me to know his thoughts on the question of historicity.) And in the process of preparing these posts I have had opportunities to catch up with what others have had to say about this Areopagus episode — e.g. Talbert, Kirsopp Lake, Haenchen — and have uncovered a range of ideas that are too broad to include in these posts here. The question of historicity is another one I may take up in another post when I have time to collate the contributions of these and Lynn Kauppi among others.

But in the meantime let’s continue with what I intended to be just one quick post but that has turned itself into some sort of mini-series now. I am discussing the thesis of Lynn Kauppi that the author of Acts 17 (let’s call him Luke) was writing with conscious allusions to (among other literary sources to be discussed another time perhaps) the fifth century BCE play Eumenides by Aeschylus. This post follows on from the previous two posts. END_OF_DOCUMENT_TOKEN_TO_BE_REPLACED

Resurrection — ἀνάστασις — in both Acts and Eumenides

F. F. Bruce, in The Book of Acts, p. 343, when commenting on the scoffing Paul received after mentioning the resurrection, recalled the scene in Aeschylus’ play that likewise mentioned the resurrection in connection with a hero appearing before the Areopagus. Most Athenians, Bruce said, would, on hearing of Paul’s mention of the resurrection, have agreed with the sentiments expressed in the play by

the god Apollo, . . . on the occasion when that very court of the Areopagus was founded by the city’s patron goddess Athene: “Once a man dies and the earth drinks up his blood, there is no resurrection.” Some of them, therefore, ridiculed a statement which seemed so absurd.

The footnote supplied points to Aeschylus, Eumenides, lines 647-8, where the same Greek word, ἀνάστασις, is used in both the play and Acts 17:18, 32.

Scoffing is a typical response to speeches by fringe figures . . . Given the assumptions of Paul’s auditors, scoffing is an entirely appropriate response. Aeschylus, Eumenides 647-48, relates how, on the occasion of the inauguration of the court of the Areopagus, the god Apollo says, “When the dust hath drained the blood of man, once he is slain, there is no return to life.”

Lynn Kauppi sees more in the link between Aeschylus and Acts than a background pointer to a common belief among Athenians of the day. He suggests that the way “Luke” weaves the allusions into the scene of Acts 17:16-34 gives reason to think that his audience “may have observed an allusion to the Athenian literary tradition.” (The Greek text is from Perseus and the English translation from Kauppi’s manuscript.) END_OF_DOCUMENT_TOKEN_TO_BE_REPLACED 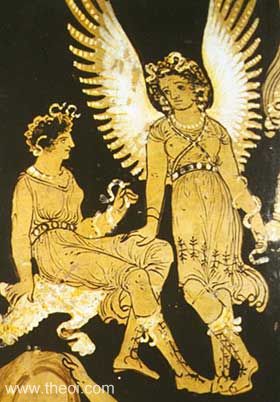 But Kauppi argues that the play was well-known in the early Christian era and did influence other writings of the time; and that a Graeco-Roman reader of Acts would likely recognize allusions in the play to “the resurrection” from the dead, the role of the Areopagus in examining the central character and the theme of the introduction of new gods into Athens. END_OF_DOCUMENT_TOKEN_TO_BE_REPLACED