I do not fully understand “racism”. 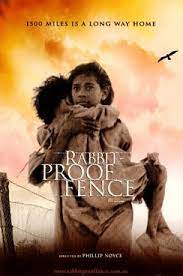 I grew up in a time when aboriginal children were sometimes being taken from their families “for their own good”. Everything “we”, the white rulers of the land, were doing in relation to aborigines was “for their good”. Today, on the contrary, one is often confronted with an aboriginal’s story of the trauma that was one of the thousands of what is now termed “the stolen generation“. Many white Australians only became aware of the impact of that practice on the indigenous people in 2002 with the release of the film Rabbit-Proof Fence.

My first experience as a target of racism was when I was touring central China. It was innocuous enough and I laughed along with it. But at the same time I could not deny that there was a little gurgle deep down in my gut that felt a little unpleasant. I asked my Chinese companion why some people seemed to be so curious and smiling among themselves as they looked across at me in a community meal hall. I was wearing shorts, and it was explained to me that someone had said I looked like a monkey because of my hairy legs and arms.

My second experience was soon after I was employed at the Singapore National Library. I don’t believe any of the local citizens and employees there would think they had a racist bone in their bodies. But on an institutional level, when statements were made at a “high level” of conceptualization — NOT at a personal one-on-one level — I was made to feel that my place as a white westerner was somehow tolerated only on sufferance. I was needed for my specialist skills and experience and the sooner my tenure was over the happier they would all be. Australians, I very quickly earned, were reflexively viewed through negative stereotypes, and my own personality and habits that defied those stereotypes made no difference to those perceptions. (I had been asked what things I found problematic with my work environment and I said that Singaporeans “work too hard” — they would almost as a rule work way past the official “knock off” time and seem to give their lives for the corporation and only go home to their families when absolutely necessary, usually quite late at night. The response indicated that I was a “typical” lazy Australian who loved to go on strike at the drop of a hat, gamble, drink and be generally work-shy. My immediate impulse was to argue the point but the environment at the time made that inappropriate. Everyone laughed at “the Australian” and “the virtue” that he saw as “a problem”.)

So as a white Westerner — and as nothing more than a tourist or temporary worker — I have experienced very mild forms of what have felt to me to be some kind of racial prejudice.

My point is that in neither of the above experiences would I have suspected any of the commenters as having the slightest awareness of any racist undertone in their remarks. Had I challenged them on their views I am convinced that they would have denied outright having any racist attitude at all. They were only joking, after all. They liked me personally. So why did I have that little unpleasant gut feeling each time? I smiled and responded as a friend and suppressed my gut gurgling so they would have no reason to notice it.

Today I listened to an Australian national radio podcast talk by Robin DiAngelo. I do not know if I can agree with every statement she made about “nice racism” — The ‘nice racism’ of progressive white people — but I don’t know yet if that’s because I haven’t thought through my own ideas thoroughly enough or if some of her views really are missing the mark by just a fraction of an inch or millimetre. She has her critics and these are candidly addressed in the podcast. But I am still left thinking.

But there is one comment of hers that I certainly could relate to:

“You’re going to have to educate yourself.

If the thought leaders in this field, for example, are using the term “white supremacy”, and you think that’s a really harsh term, and a terrible term, and you don’t understand why they’re using it, then rather than ask us not to use it, see it as, “Well, I need to get up to speed because I must be missing something. They’re using this with comfort, and they’re talking about something that’s different from what I think this is about”, and so, we’re back to the humility that I necessarily am missing something, because this is arguably the most complex, nuanced, sociopolitical dynamic of the last several hundred years.

In her most recent book she writes:

Our racism avoids the blatant and obvious, such as saying the N-word or telling people to go back to where they came from. We employ more subtle methods: racial insensitivity, ignorance, and arrogance. These have a racist impact and contribute to an overall racist experience for BIPOC people, an experience that may be all the more maddening precisely because it is easy to deny and hard to prove. I am constantly asked for examples, so here are a few: . . . .

• Not understanding why something on this list is problematic, and rather than seeking to educate yourself further, dismiss it as invalid.

In case you are wondering what the other examples are, I copy and paste them here from DiAngelo’s book, Nice Racism:

• Confusing one person for another of the same racial group
• Not taking the effort to learn someone’s name; always mispronouncing it, calling them something that’s easier to pronounce; making a show of saying it, or avoiding the person altogether
• Repeating/rewording/explaining what a BIPOC person just said
• Touching, commenting on, marveling at, and asking questions about a Black person’s hair
• Expecting BIPOC people to be interested in and skilled at doing any work related to race
• Using one BIPOC person who didn’t mind what you did to invalidate another who did
• Calling a Black person articulate; expressing surprise at their intelligence, credentials, or class status
• Speaking over/interrupting a BIPOC person
• Lecturing BIPOC people on the answer to racism (“People just need to . . .”)
• Bringing up an unrelated racial topic while talking to a BIPOC person (and only when talking to a BIPOC person)”
• Blackface/cultural appropriation in costumes or roles
• Denying/being defensive/explaining away/seeking absolution when confronted with having enacted racism
• Only naming the race of people who are not white when telling a story
• Slipping into a southern accent or other caricature when talking to or about Black people
• Asking for more evidence or offering an alternate explanation when a BIPOC person shares their lived experience of racism
• Making a point of letting people know that you are married to a BIPOC person or have BIPOC people in your family
• Not being aware that the evidence you use to establish that you are “not racist” is not convincing
• Equating an oppression that you experience with racism
• Changing the channel to another form of oppression whenever race comes up
• Insisting that your equity team address every other possible form of oppression, resulting in racism not getting addressed in depth or at all (“It’s really about class”)
• Including “intellectual diversity,” “learning styles,” “neurodiversity,” and personality traits such as introversion/extroversion in your diversity work so that everyone in your majority-white organization feels included
• Gossiping about the racism of other white people to BIPOC people to distinguish yourself as the good white person
• Using an experience as the only white person in a group or community to say that you’ve experienced racism (which you call reverse racism)
• Telling a BIPOC person that you witnessed the racism perpetrated toward them but doing nothing further
• Equating your experience as a white immigrant or the child of white immigrants to the experiences of African Americans (“The Irish were discriminated against just as bad”)
• Using your experience with service learning or missionary work in BIPOC communities to present yourself as an expert on how to address the issues experienced by those communities
• Loving and recommending films about racism that feature white saviors
• Deciding for yourself how to support a BIPOC person without asking them what they want or need
• Claiming to have a friendship with a Black colleague who has never been to your home
• Being involved in your workplace equity team without continually working on your own racism
• Attending your first talk or workshop on racism and complaining that the speaker did not provide you with the “answer”
• Asking how to start a diversity consulting business because you attended a talk and found it interesting
• Focusing your diversity work on “increasing your numbers” with no structural changes and equating increased numbers with racial justice
• Blocking racial justice efforts by continually raising a concern that your organization is “not ready” and needs to “go slow” to protect white people’s delicate racial sensibilities
• Not understanding why something on this list is problematic, and rather than seeking to educate yourself further, dismiss it as invalid

It’s that last one that got to me and made me pause and wonder. We all know others who fall into that category and have probably been there ourselves at some time. So I am forced to rethink the other points I find myself disagreeing with. That doesn’t mean Robin DiAngelo is right all the time, but the questions she raises are of concern to some people so maybe I need to think them through more fully.

One comparison that came up in that radio interview was the response of a husband who says he cannot be racist because he married a black woman, and the converse for the wife. DiAngelo pointed out that a man marrying a woman does not prove that he is free from sexist or patriarchal (and anti-feminist) biases.

It’s a topic I keep returning to and wondering if I have really understood all its complexity. Individually we may not be racist but we are part of a community and perhaps that’s where we have to wonder about our unconscious biases and how they influence systemic words and actions.

Other reading that surfaced from listening to the above: