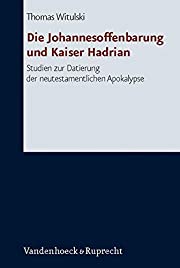 My intent in this post is to give an overview of the key points argued by Thomas Witulski [TW] in Part 2 of The Revelation of John and Emperor Hadrian [translated from the German: Die Johannesoffenbarung und Kaiser Hadrian]. I include links to works that he critiques so you can follow up the other side in their own words.

Most interpreters of the above verse (Rev 1:19) consider it to be the key to understanding what Revelation is all about. But after that, opinions are divided. Does it mean that the first part of the book that introduces letters to seven churches is describing “the things that are” leaving the remaining chapters to cover future events?

In short, though TW takes four pages to say it, the answer is ‘no’. The messages to the seven churches contain prophecies of the future and the main body of the book includes flashbacks to events past. Furthermore, both parts of the book dwell heavily upon what is happening now.

So why did the author write it? TW engages with four main views.

1. A Response to Current Persecutions of Christians?

Some scholars* make a case for the author seeking to encourage Christians in Asia Minor who have suffered harassment and persecution. Horrid torments were in store for the persecutors! If the emperor cult was a problem for Christians it was only so because persecution was imposed on those who would not cooperate with it, it is claimed. Other scholars have noted the absence of evidence for state persecution of Christians at the time they believe the work was composed and argue that the author was nervously expecting persecutions in the near future.

TW is not convinced for the following reasons:

2. A Cathartic Response to a Perceived Crisis?

In the post discussing the reasons Revelation is often dated around the time of Domitian I relied heavily on TW’s quotations from Adela Yarbro Collins’ work Crisis and Catharsis. TW returns to the same work when it presents the influential view that the people for whom our apocalypticist was writing were not seriously persecuted in any objective sense but that the author perceived or felt that their condition was far worse than they recognized. Since the author felt immersed in intolerable conditions that generated feelings of “powerlessness”, “fear”, “resentment” and “envy” he attempted through his creative imagination to arouse readers to the same awareness. He painted a scenario through which these negative feelings — feelings of an “unbearable tension” between what was and what ought to be — could first be aroused and then worked through cathartically as the literary drama unfolded towards its resolution. Such an argument does not need evidence of severe and systematic persecution.

Not that it was all “in the mind”. Yarbro Collins does say that there were objective, socio-political-historical facts that aroused the subjective hyper-reactions of the author. These “objective facts” are said to be found in chapter 18:

11 “And the merchants of the earth will weep and mourn over her, for no one buys their merchandise anymore: 12 merchandise of gold and silver, precious stones and pearls, fine linen and purple, silk and scarlet, every kind of citron wood, every kind of object of ivory, every kind of object of most precious wood, bronze, iron, and marble; 13 and cinnamon and incense, fragrant oil and frankincense, wine and oil, fine flour and wheat, cattle and sheep, horses and chariots, and bodies and souls of men. . . . 15 The merchants of these things, who became rich by her, will stand at a distance for fear of her torment, weeping and wailing, 16 and saying, ‘Alas, alas, that great city that was clothed in fine linen, purple, and scarlet, and adorned with gold and precious stones and pearls!

For YC, it is important to note that Rome became wealthy through oppressive taxes imposed on her subjects.

TW is not convinced:

3. A Value System of a “Cognitive Minority”?

According to L. L. Thompson in The Book of Revelation: Apocalypse and Empire, Christians of the time lived in peace:

Christians lived quiet lives, not much different from other provincials. The economy, as always, had its ups and downs; and the government kept the peace and demanded taxes. (p. 95)

There was no crisis, not even a subjectively “perceived” one, because, Thompson maintains, a crisis would generate a clear dualistic perception of the world and Revelation supposedly does not have that view. For Thompson, in Revelation God is Pantocrator, Satan is used by God to bring about his plan, the world is “merged” or “brought into” a new world and thus saved. The author is seeking to draw his readers into his own minority view of the world in opposition to the majority view.

TW, on the contrary, classifies Revelation with other Jewish apocalypses that may also be analysed as lacking a stark “ontic dualism” yet are products of crisis. Besides, for TW Revelation does approach a dualism that is surely undeniable in its many opposing images set in conflict.

Moreover, Thompson’s argument does not explain why Revelation was not written any earlier if it was principally an effort to persuade others of a minority perspective.

But surely, TW insists, Revelation does speak of some kind of conflict facing Christians and that conflict is said to be very specifically related to the emperor, not just the Roman empire.

4. An Answer to Inner-Christian Conflicts?

Scholars advancing this view include:
* Klauck, Hans-Josef. “Das Sendschreiben nach Pergamon und der Kaiserkult in der Johannesoffenbarung.” Biblica 73, no. 2 (1992): 153–82.
P.B. Duff, Who Rides the Beast? Prophetic Rivalry and the Rhetoric of Crisis in the Churches of the Apocalypse
R.M. Royalty, The Streets of Heaven: The Ideology of Wealth in the Apocalypse of John

Another proposition for explaining Revelation is that it was written to take a stand against Christians who for social or economic reasons were seeking some form of assimilation to the social, economic and religious aspects of their pagan environment. Some Christians, it is thought, were headed in a gnostic direction: these Christians had latched onto Paul’s writings that they were not to cut off all ties with worldly people (1 Cor 5:9-10) while the apocalypticist calls on God’s people to “Come out of Babylon!” (Rev 18:4). If the worldly goods were of little importance, the “proto-gnostic” might say, then nothing is lost by using them in association with pagan practices.

Revelation has been interpreted as even condemning participation in trade within the Roman empire on the grounds that it supports a Satanic system. Honest wealth can only come from God and will be bestowed on his elect in the New Jerusalem but even then it won’t be a preoccupation of anyone.

Against this background, Klauck* characterises the apocalyptic as an itinerant prophet, whose lifestyle was determined by a rigorous ethos characterised, among other things, by austerity, and renunciation of violence. On the basis of this ethos, he developed the critical attitude towards assimilation and society that he expressed in his work. His idea of a common life in a Christian community was essentially based on a “community model […] [with] fraternal-egalitarian traits”. (Witulski, p. 92, translation)

If none of the above motives are behind Revelation what is the reason for it?

Reaction to the Intensification of the Demand for
Emperor Worship

At the end of each missive to the churches we read the same formula: a wake-up call and an overcomer promise.

He that hath an ear, let him hear what the Spirit saith to the churches. To him that overcometh, to him will I give to eat of the tree of life, which is in the Paradise of God (2:7)

He that hath an ear, let him hear what the Spirit saith to the churches. He that overcometh shall not be hurt of the second death. (2:11)

He that hath an ear, let him hear what the Spirit saith to the churches. To him that overcometh, to him will I give of the hidden manna, and I will give him a white stone, and upon the stone a new name written, which no one knoweth but he that receiveth it. (2:17)

And he that overcometh, and he that keepeth my works unto the end, to him will I give authority over the nations: and he shall rule them with a rod of iron, as the vessels of the potter are broken to shivers; as I also have received of my Father: and I will give him the morning star. He that hath an ear, let him hear what the Spirit saith to the churches. (2:26-29)

He that overcometh shall thus be arrayed in white garments; and I will in no wise blot his name out of the book of life, and I will confess his name before my Father, and before his angels. He that hath an ear, let him hear what the Spirit saith to the churches. (3:5-6)

He that overcometh, I will make him a pillar in the temple of my God, and he shall go out thence no more: and I will write upon him the name of my God, and the name of the city of my God, the new Jerusalem, which cometh down out of heaven from my God, and mine own new name. He that hath an ear, let him hear what the Spirit saith to the churches.. (3:12-13)

He that overcometh, I will give to him to sit down with me in my throne, as I also overcame, and sat down with my Father in his throne. He that hath an ear, let him hear what the Spirit saith to the churches.. (3:21-22)

The messages are thus not limited to a single church but to all the churches. The overcomer sayings must further be read in the context of what is said to follow in the main body of the book since the same word (νικῶν) and idea is repeated there (νικῶντας) and in the final chapter. But TW draws our attention to what it is, exactly, that the Christian overcomes:

And I saw as it were a sea of glass mingled with fire: and them that had gotten the victory (νικῶντας) over the beast, and over his image, and over his mark, and over the number of his name, stand on the sea of glass, having the harps of God. (Rev 15:2)

Something other than the “imperium Romanum” is behind that passage. An image and the number of the name of the beast are brought to the fore. Those for whom Revelation was written were not warned of some distant trial but each of the churches was encouraged to “overcome” and what they must overcome appears to be very specific and related to emperor worship.

In Revelation 12 we read of the fate of God’s heavenly adversary, the dragon or Satan, who prepares to attack the Christians. The next chapter introduces the first beast or the Roman power and emperor. A second beast appears as a propagandist for the first, calling on all people to worship the imperial power and its emperor. This crisis confronting Christians is happening “now”, at the time of writing. The emperor to be worshipped is identified as a “Nero redivivus”. The focus is on one particular emperor and a companion who speaks for him. For TW this makes it very likely that the author is witnessing an unprecedented emphasis on enforcement of the cult of emperor-worship.

There is much more to be said here that will be brought out in future posts.

14 thoughts on “Why was the Book of Revelation Written?”