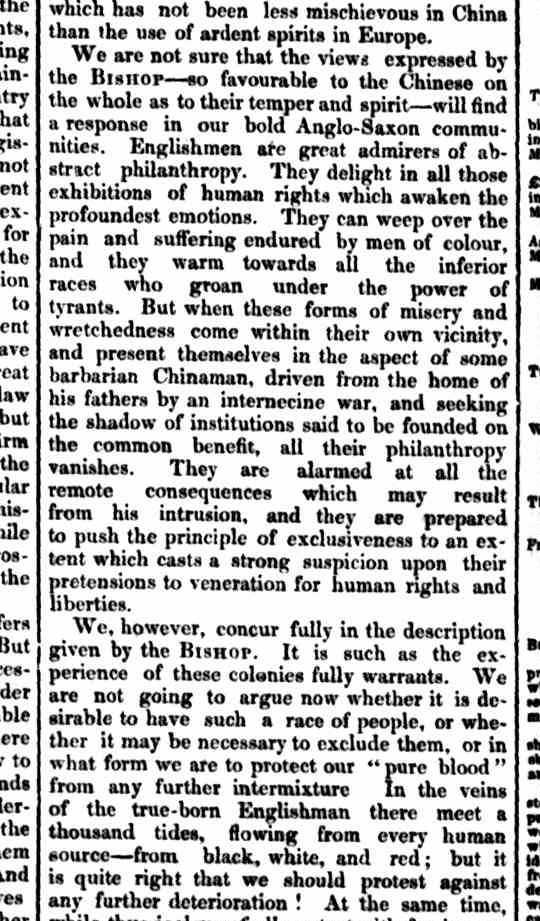 I so often find a real fascination in reading old newspapers. How refreshing it is to read editorials, articles and letters using cheeky tones to address the most serious political and social issues of their day. If only more news and social media could be more like those days! Is it my imagination or has something in our national mood seriously shifted in a darker direction since the nineteenth century?

Anyway, here’s the point of this post. Read how alike are the thoughts expressed here in a letter to the colonial newspaper that we find expressed and discussed today — our confidence that we are not racists being compared with our attitude towards immigrants of a different race fleeing horrendous conditions in their own country and seeking refuge with us.

Englishmen are great admirers of abstract philanthropy. They delight in all those exhibitions of human rights which awaken the profoundest emotions. They can weep over the pain and suffering endured by men of colour, and they warm towards all the inferior races who groan under the power of tyrants. But when these forms of misery and wretchedness come within their own vicinity, and present themselves in the aspect of some barbarian Chinaman, driven from the home of his fathers by an internecine war, and seeking the shadow of institutions said to be founded on the common benefit, all their philanthropy vanishes.

That was written not long after the Opium Wars and an earlier part of the same letter made mention of a sense of national “war guilt” for imposing reparations on the Chinese for daring to resist the British right to sell opium to their citizens. Reference is also made to the horrific wars in China at that time. That would be the Taiping Rebellion. The same letter acknowledged “backward” customs of the Chinese but concluded by reminding readers of “their veneration of parents, their love of knowledge, and their quiet and tolerant spirit.”

One thought on “Still the Same after 162 years: Our attitude towards other races looking to us for refuge”