Nanine Charbonnel now asks how the understanding of how the gospels have been written should affect how we read them. Metaphors abound in her discussion of how to read metaphorical narratives. Think of Hebrews 10:20, where readers are directed to enter the divine presence through the veil of the inner sanctuary, a veil which itself represents the flesh of Jesus. 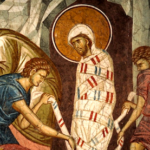 The book is there, then, but the work is still hidden. It is absent, perhaps radically so; in any case it is concealed, obfuscated by the evident presence of the book, behind which it awaits the liberating decision, the “Lazare, veni foras.”

To make this stone fall seems to be reading’s mission: to render it transparent, to dissolve it with the penetrating force of the gaze which unimpeded moves beyond. There is in reading, at least at reading’s point of departure, something vertiginous . . . But there is more; and what makes the “miracle” of reading still more singular . . . .To roll back the stone, to obliterate it, is certainly something marvelous, but it is something we achieve at every moment in everyday language. At every moment we converse with Lazarus, dead for three days — or dead, perhaps, since always. In his well-woven winding sheet, sustained by the most elegant conventions, he answers us and speaks to us within ourselves.

— Blanchot, The Space of Literature, 195

Following on from Maurice Blanchot who saw Lazarus in his burial cloths as the incarnation of a book and Jesus’ command for Lazarus to “Come forth!” as the act of reading, NC runs with an image of strips of cloth as the surface material for writing and the need for readers to find new ways to understand those words. (Did scribes also write on linen? I am not aware of the practice so I will only touch on a few passages in the closing pages: my grasp of French is too elementary to read with confidence the nuances and subtleties that are embedded in the metaphors in these closing pages.)

Peter ran to the tomb and, bending down, saw only the strips of cloth that had been used to bind the body of Jesus: Luke 24:12 (C’s text has a small error here with the Greek word used in our manuscripts). In John 20:5 another disciple sees the same bands of linen that had been used to wrap Jesus lying on the ground. In 2013 Father Antoine Adam delivered an Easter homily on radio France-Culture in which he said the cloth is rolled up, like the book that has to be unrolled, to see the impression of the face of Jesus left on it, like the body of Scripture, for Jewish Scriptures are a corpus.

The phylacteries or tefillin were known in early times (Matthew 23:5) and the leather strips contained writings. Leon of Modena described the way these strips would be bound so that they formed the letter yod on the left arm and were inscribed with the letter shin on the forehead, which, one might note, are the first two letters of Jeshua. One would like to propose the image of a comparison between the burial cloths and the tefillin strips, both are left lifeless on the floor after the resurrection of and transformation of the old body.

It is easy to over-reach in the world of metaphors. I think NCs suggestion of Maurice Mergui’s comment on the striking of Jesus with the reed (the same word is used to translate the writing instrument — Matthew 27:30) to signal Jesus being struck according to Scripture, that is, by midrash. When we read in the New Testament the phrase “in/by the spirit” (e.g. Acts 20:22-23) should we always think of the Holy Spirit or is there sometimes an allusion to “the spirit of the author” or midrashic interpretation? 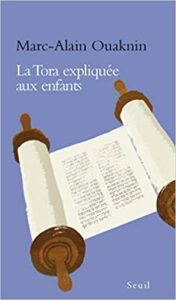 Excerpt From: Marc-Alain Ouaknin. “The Torah Explained to Children.” Apple Books. (I have quoted a little more than NC quotes on p. 447. As per John 6:63, NC recalls, the words spoken are spirit and life. )

Pentecost, the anti-Tower of Babel

The punishment of the confusion of languages at the Tower of Babel is reversed in the midrash of Pentecost. Here an author has set down in a text a fortuitous miracle of comprehension without a mediator. But without a mediator has something else become hidden, lost? NC concludes this chapter with the words of Michel Serres:

The new meaning spread everywhere starting from wind and noise. Not a single language translated in several languages, but several spoken and several heard at the same time. . . . If the orator is heard as is, the network is decentered, even locally: there is no longer an intercepter, no longer a crossroads or intermediate; there is no longer a town; Hermes, the father of Pan, died on the Pentecost.

And that brings NC to the observation that it is the Paraclete that is introduced in the gospels as the new interpreter — a subject for a future study.

By comparing texts and illustrations of that period, Huchon quite convincingly demonstrates that Labé’s works amount to a literary hoax perpetrated by a group of male poets based in Lyon.

We have now completed a series of reading through Nanine Charbonnel’s Jésus-Christ, sublime figure de papier. Other books have been written about other “paper figures”, and NC points readers to Mireille Huchon’s work, Louise Labé: Une créature de papier, casting doubt on the very existence of the sixteenth-century French writer. Despite the ridicule, there remains room to pause and wonder about Dante’s character Beatrice whom Father Mandonnet in Dante le théologien set out a case for her being a purely symbolic figure. The Augustan History or Historia Augusta was long read at face value as the biographies of late Roman emperors written by half a dozen authors during the times of Diocletian and Constantine. In 1889 an article by Hermann Dessau ripped modern confidence from this source by arguing that it was a forgery:

The revolutionary ideas of Dessau, which raised a storm in their time and only gradually became accepted, are hardly contested today.

(On this blog we have posted similar notices of persons, widely thought either in the past or in more recent times to have been historical, are indeed more likely to have been literary fictions and there are more, of course: King Arthur, William Tell, Ned Ludd, Demonax, Dictys and Dares…)

The Genius of Fictionality

What NC has not done, as she points out, is present an explanation of how Christianity began. Christianity’s birth and early confused relationship with “Judaism” are still being explored. Without endorsing the lyrical tone of Edgar Quinet NC quotes this portion of his reply to the critic David Friedrich Strauss,

. . . the miracle of Christianity is not this cure, but rather the prodigy of humanity extended on its sick couch, there cured of the leprosy of castes, of the blindness of pagan sensuality, and which, suddenly rising, walks far from the threshold of the old world. He knows well, that the miracle does not consist in the water being changed into wine, at the marriage in Cana, but rather in the change of the world by one single thought — in the sudden transfiguration of the ancient law — in the casting-off of the old man — in the empire of the Césars struck with stupor, as the soldiers of the sepulchre — in the barbarians mastered by the influence, the ark of which they had conquered — in the reformation which discusses that influence — in the philosophy which denies it — in the French revolution, which thought to destroy it, and which serves but to give it effect. These are the miracles . . .

We don’t have to be believers to acknowledge that something quite extraordinary has emerged through this fictional textuality and distinctive creation of the somewhat vague central character, evidently both a collective and an individual personality as well as being the personal point at which God meets humanity. As a philosopher, NC acknowledges a three-fold contribution this fiction has made to western philosophy: Incarnation — which has promoted respect for the things below the world of spirit; Imitation — with an “unheard of richness of modes” unknown in other religions (and with reference to her exploration of such themes in her earlier book Critique des métaphysiques du propre. La ressemblance et le Verbe, chapters 3 and 7); Inspiration — . . . .

I won’t attempt to cover any more of NC’s words there because some conclusions are meant to be read in full so that the reader is left drawing in their meanings long after having put the book down. But NC is quite right to acknowledge that “the invention of the figure of Jesus is therefore a key moment in human history”. His image has become an integral part of our culture. To translate NC’s closing words:

Never has any character been created like this: personification of the presence of his God, of his (chosen) people, of the event of his death, of his salvation and of his future at the end of time.

And never has any other human work known such a hermeneutical misunderstanding.

Reading Nanine Charbonnel’s book has been a fascinating, rewarding journey, not only for its immediate contents but for the many works of French scholarship I would otherwise never have known. (I confess I have collected a (small?) pile of books in the French language that I have already scanned to make translation easier. And they are not all biblical related. I enjoy most those books that lead one to a whole new field of education.) I have sometimes wondered at certain points if NC has gone too far in some of her suggestions. I have been bugged by what I have thought were minor errors here and there only to eventually learn that the French have different standards and systems that explained many of them. I still am not sure what to make of the possibility that the gospels were originally written in Hebrew but am thinking that one through and the many other implications that must come with that hypothesis. One thing is clear, though. There can be no doubt that certain figures, certain places and events in the gospels carry symbolic messages. We can even identify the symbolism in Jesus being baptized in the Jordan River and then going into the wilderness for forty days of trials. At what point, if at all, one must surely ask, can we identify a shift from symbol to historical reality.

Blanchot, Maurice. The Space of Literature: A Translation of “L’Espace Littéraire.” Translated by Ann Smock. Lincoln: University of Nebraska Press, 1989.