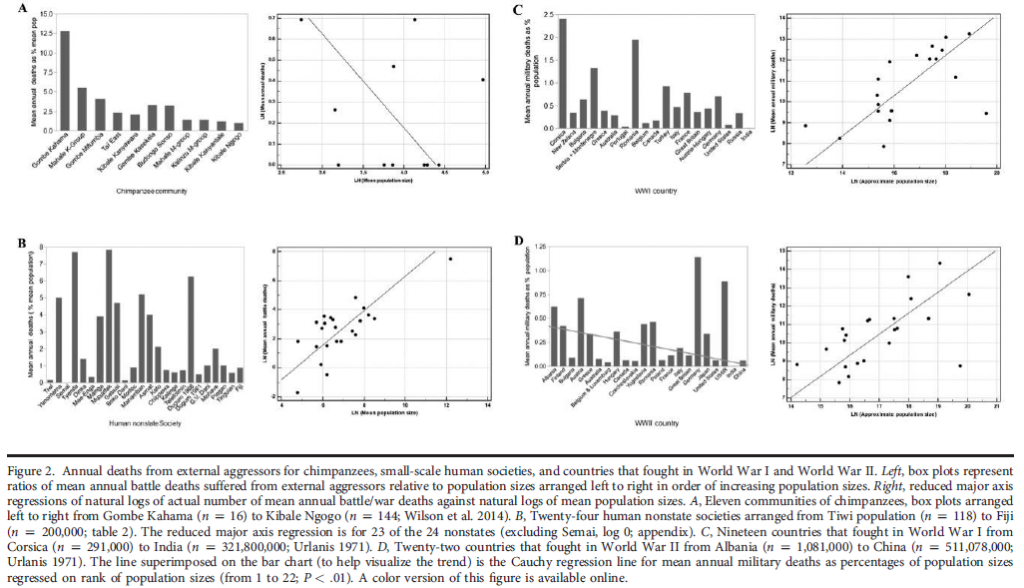 Here is Pinker’s List indicating that extreme violence was more prevalent the further back we go: 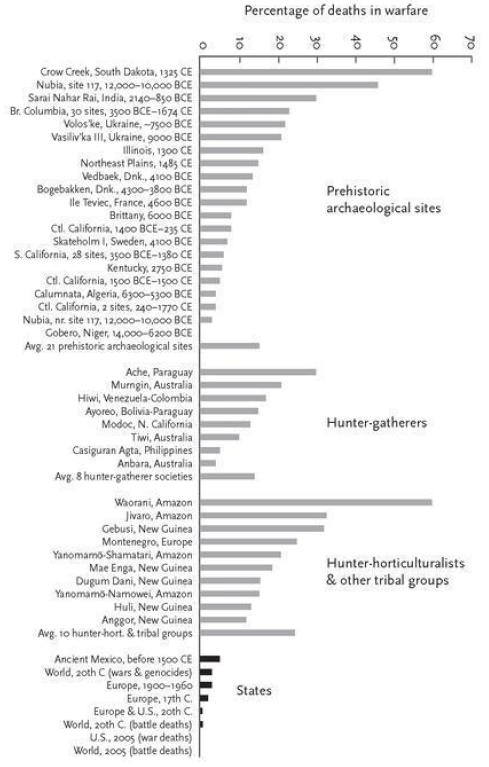 Against Pinker’s claims of evidence for prevalent warfare at those twenty-one prehistoric archaeological sites, R. Brian Ferguson assures us that the evidence is simply not there.

Pinker’s (2011, p. 49) List compiles data from Keeley and Bowles to include 21 cases. One case has no killings, and it will be shown that six more of the 21 cases can be tossed out. The others, valid cases of multiple violent deaths, will be shown to be a very selective compilation of high-killing situations, in no way representative of “typical” war casualties of prehistoric people in general. (Ferguson, p. 116)

Ferguson presents readers with a detailed analysis of each of Pinker’s references documenting prehistoric warfare and sums up as follows (and I reformat his paragraph):

So let us look back over Pinker’s list. Of the original 21,

Of the figures used by Pinker Ferguson avers

Is this sample representative of war death rates among prehistoric populations? Hardly. It is a selective compilation of highly unusual cases, grossly distorting war’s antiquity and lethality. The elaborate castle of evolutionary and other theorizing that rises on this sample is built upon sand. Is there an alternative way of assessing the presence of war in prehistory, and of evaluating whether making war is the expectable expression of evolved tendencies to kill? Yes. Is there archaeological evidence indicating war was absent in entire prehistoric regions and for millennia? Yes. The alternative and representative way to assess prehistoric war mortality is demonstrated in chapter 11, which surveys all Europe and the Near East, considering whole archaeological records, not selected violent cases. When that is done, with careful attention to types and vagaries of evidence, an entirely different story unfolds. War does not go forever backwards in time. It had a beginning. We are not hard-wired for war. We learn it. (Ferguson, p. 126)

Or maybe the “learning” of it is related to how our “hard-wired” nature responds to larger and more complex communities?

But more than that, before war became “normal,” there may have been developed cultural systems to prevent conflict from turning into collective violence. Cross-cultural research tells us that there are factors and forces which promote peace, which are quite distinct from those that encourage war. The comparative record from Europe and the Near East suggests that these could be investigated, if archaeologists recognized the possibility, and chose to investigate them. . . .

Across all of Europe and the Near East, war has been known from 3000 BC, or millennia earlier, present during all of written history. No wonder we think of it as “natural.” But the prevalent notion that war is “just human nature” is empirically unsupportable. The same types of evidence that document the antiquity of war refute the idea of war forever backwards. War sprang out of a warless world. (pp. 228 and 229)

Ferguson, R. Brian. 2015. “The Prehistory of War and Peace in Europe and the Near East.” In War, Peace, and Human Nature: The Convergence of Evolutionary and Cultural Views, edited by Douglas P. Fry, 191–240. Oxford: Oxford University Press.