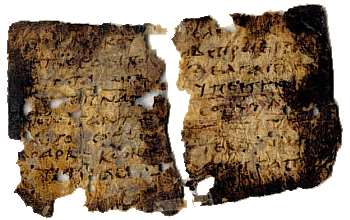 Immersed as we are in the heritage of the Christianity of the Crucified Christ it is easy to forget (if we ever knew) that there was another side to Christian origins. Try to imagine what gave rise to a Christianity that knew nothing of the pierced, broken body and shed blood of Jesus as the way to salvation. Imagine their sacred writings said nothing at all about the members of the church being united by eating the body and drinking the blood of their saviour but instead enjoined the following:

Now concerning the Eucharist, give thanks this way.

We thank thee, our Father, for the holy vine of David Thy servant, which You madest known to us through Jesus Thy Servant; to Thee be the glory for ever..

And concerning the broken bread:

We thank Thee, our Father, for the life and knowledge which You madest known to us through Jesus Thy Servant; to Thee be the glory for ever. Even as this broken bread was scattered over the hills, and was gathered together and became one, so let Thy Church be gathered together from the ends of the earth into Thy kingdom; for Thine is the glory and the power through Jesus Christ for ever..

But let no one eat or drink of your Eucharist, unless they have been baptized into the name of the Lord; for concerning this also the Lord has said, “Give not that which is holy to the dogs.”

But after you are filled, give thanks this way:

We thank Thee, holy Father, for Thy holy name which You didst cause to tabernacle in our hearts, and for the knowledge and faith and immortality, which You madest known to us through Jesus Thy Servant; to Thee be the glory for ever.

Thou, Master almighty, didst create all things for Thy name’s sake; You gavest food and drink to men for enjoyment, that they might give thanks to Thee; but to us You didst freely give spiritual food and drink and life eternal through Thy Servant.

Before all things we thank Thee that You are mighty; to Thee be the glory for ever.

Remember, Lord, Thy Church, to deliver it from all evil and to make it perfect in Thy love, and gather it from the four winds, sanctified for Thy kingdom which Thou have prepared for it; for Thine is the power and the glory for ever.

Let grace come, and let this world pass away. Hosanna to the God (Son) of David!

That is from the Didache (did-a-kee), or Teaching of the Twelve Apostles, that some (Wikipedia says “most”) scholars today date to the first century. That’s possibly around the same time Paul was writing his letters and the time the first gospels were being written.

Compare the instructions for our more familiar branch of Christianity (1 Cor. 11:23-26 NASB):

For I received from the Lord that which I also delivered to you, that the Lord Jesus in the night in which He was betrayed took bread; and when He had given thanks, He broke it and said, “This is My body, which is for you; do this in remembrance of Me.”

In the same way He took the cup also after supper, saying, “This cup is the new covenant in My blood; do this, as often as you drink it, in remembrance of Me.” For as often as you eat this bread and drink the cup, you proclaim the Lord’s death until He comes.

That looks like two very different Christian factions from the earliest years of Christianity’s origins.

We know in letters of Paul we read of attacks on “false” apostles who teach a “false” Christ. Does the Didache represent one of those factions Paul saw as a threat?

The Gospel of Mark is sometimes considered a “Pauline” gospel because, in part, of its overlaps with Paul’s teachings on faith, forgiveness, the law. The same gospel presents the twelve apostles as dim-witted failures despite being the first to “know” Jesus.

I am fascinated by the Didache’s picture of the bread being broken as a symbol of the church being scattered. That echoes the gospel saying of Jesus looking on the multitudes in need of a shepherd (Mark 6:34), and Ezekiel 34:5’s lament that the sheep were scattered for want of a shepherd; and Psalm 23 with its idyllic image of the sheep as one following the good shepherd and Mark 13:27’s promise that angels would be sent out to gather the elect from the four winds, from the farthest end of the earth and the farthest end of heaven.”

Zechariah 13:7’s hellish vision of the sheep being scattered because the shepherd was struck down is surely the very reverse of the above.

Surely this is a very different Christianity from the one that we have inherited through Paul and the canonical gospels. For Paul the broken body and blood of Christ were the core icons of his faith. How can we imagine a Christianity without them?

How do we explain the emergence of the belief system that produced the Didache? How can we explain such two opposing forms of the faith from the same first century?

17 thoughts on “The Other (Less Bloody) Side of Christian Origins”