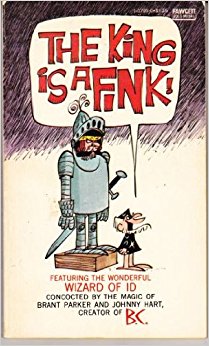 Before I could answer, a Danish woman who had spent her teens in the U.S. said, “It’s a bird. It’s supposed to be a ‘finch.’ The king is a finch.” Some nodded. Others were still perplexed. After all, why would you compare a monarch to a bird?

I stepped in and politely said, “No. It’s fink.” And I tried to explain the comic strip to them.

Neither of you knows what the sentence means, but the person with more supposedly relevant information has much more confidence in his wrong explanation.

I relate this story to point out the importance of cultural context. Imagine you’re a Brazilian trying to get a networked laser printer to work out in the Amazon jungle, with no access to the Internet. You finally get that first sheet of paper to crank out, and it says, “My hovercraft is full of eels!” If you didn’t know English, you might be tempted to look up each word. And you might eventually get the mental picture of a hovercraft — that’s full of eels. You would be right if you said to yourself, “I have no idea what that means.”

But your colleague who learned English at the university and who actually knows quite a bit about nautical craft and sea creatures says he knows exactly what it means. He invents a complex story that seems to make narrative sense, but is completely wrong. The truth is, you both lack the cultural context to understand that it comes from a comedy sketch and, further, that in the HP environment, it’s just a funny, nonsensical thing to say.

Neither of you knows what the sentence means, but the person with more supposedly relevant information has much more confidence in his wrong explanation. Please understand that I’m not bemoaning the fact that both of you are wrong. When you said, “I don’t know,” you were right. In cases with insufficient information, admitting our ignorance pending more information is the correct response.

Εἰ ἔστιν σῶμα ψυχικόν, ἔστιν καὶ πνευματικόν.
If there is a body physical, there is also spiritual [body].

I assume Paul knew exactly what he meant by a spiritual body. But I don’t assume that my understanding of that Greek sentence necessarily equates to my knowing what Paul meant.

On the other hand, NT scholars will likely know the history of the Church’s understanding of the term — far more than I would ever care to learn. But such a deep theological understanding can sometimes be a liability for the rational historian. The Church, after all, needed to harmonize the disparate views of the resurrected human corpse. If the body is raised in spiritual perfection, then why was Jesus still wounded? If the resurrected body is physical, then how did Jesus walk through solid walls? The notion that there is only one answer that explains everything is a deadly fallacy. It’s apologetics, and, consequently, anti-rational history.

In addition, scholars have spent untold semester hours of Greek language instruction. You don’t even have to ask them. Unprompted, they’ll gladly tell you how much they know about ancient languages, and how that alone makes them professional experts with insights and understanding you can’t hope to approach. But that very expertise makes them vulnerable to the illusion that they know more than they can know, and to assert that their interpretation of the text is plain, obvious, or even indisputable.

To be clear, I’m not asking readers for comments explaining what Paul’s “spiritual body” is supposed to mean. Thanks to the Internet, the doctrinal debates over the nature of bodily resurrection are at our fingertips. Instead I’m asking you to consider mental errors and fallacies to which we are all vulnerable, but which seem to disproportionately plague scholars of the Bible. In the coming few posts, we’ll look at them.

9 thoughts on “What’s the Matter with Biblical Scholarship? Part 1”