It’s not always a happy experience to get to know too much about some of our favourite talents. Forgive my latecomer status to this little bit of knowledge — but I have just learned that Alice in Wonderland contains a number of scenes that were inspired by the author’s disdain for Darwin’s theory of evolution. Charles Dodgson (alias Lewis Carroll) was as reactionary as one could get in Victorian times. Thanks to Rachel Kohn’s Radio National program, The Spirit of Things, for alerting me to the “low down” on this work and its author: Decoding Alice in Wonderland. That led to David Day’s article, “Oxford in Wonderland.” Queen’s Quarterly 117.3 (2010): 403+ 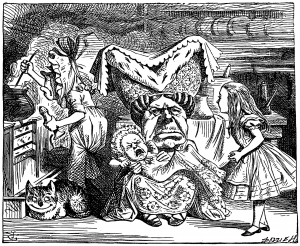 One of the historic turning points in human intellectual history in this new era took place a few hundred yards from Lewis Carroll’s residence. This was the famous 1860 Oxford Darwinian Debate in which the bombastic anti-Evolutionist Wilberforce was verbally eviscerated by the rational pro-Evolutionary Thomas Henry Huxley. Known as “Darwin’s Bulldog,” Huxley’s victory became emblematic of the triumph of progressive rational science.

In Wonderland, Carroll’s satire of the Darwin debate takes place in the strange smoke-filled Kitchen of the Ugly Duchess. The Oxford counterpart of the Duchess’ Kitchen is one of the grand sites of the university: Cardinal Wolsey’s Great Kitchen. Built during the reign of Henry VIII, Oxford’s Great Kitchen has a massive hearth for roasting entire pigs and, like the Duchess’ Kitchen, was frequently filled with smoke.

The Great Kitchen was also the one part of the university that was directly under the authority of the Bishop of Oxford. Samuel Wilberforce, the son of the anti-slavery movement’s “Great Emancipator” William Wilberforce, was known to parliamentarians and political pundits as “Soapy Sam” because of his brash and illogical debating style. He was the perfect model for the logic-chopping, moralizing, and argumentative Ugly Duchess.

In this fantastic “Kitchen of Creation,” one can imagine these insane cooks mixing up a mad biological soup. Evolution is gone berserk. Uniformed fish and frog footmen seem to have just stepped out of the primordial ooze. A constantly shape-shifting baby appears to demonstrate “survival of the fittest” by preferring beatings to affection. Strangest of all, Alice’s attempt to nurse this child results in a strange backward form of evolution: from a boy into a pig.

Speaking of parallels there was an interesting article a while back on Εις Δοξαν looking at the eleventh labour of Heracles in which he was ordered to recover some golden apples:

[The apples] were a gift from Gaia to Zeus and Hera at their wedding. These apples were the source of immortality for the gods and, interestingly, were guarded by a dragon, itself the offspring of Typhon and Echidna.

So, a tree of apples (fruit) that gave immortality which was guarded by a serpent–where have I read of such things before? Yes, this is obviously quite different from the Genesis account, but it is quite interesting that these elements–fruit, unnaturally long life, and a serpent–are all together in the same story.

I once used to sit mystified by such teasingly unrelated yet common elements appearing in both Greek and Biblical myths. But then Claude Lévi-Strauss rode into my bookshelf and opened up the possibility, even likelihood, of an anthropological link. Wajdenbaum has published along these lines and I hope to make time to try to see if the different structures of these common elements can be explained in ways  not unlike Lévi-Strauss’s social-anthropological explanations of the various mutations of South American myths.

I used a few hours on a plane the other day to catch up on what Tom Harpur’s mythicist argument is all about. His book, The Pagan Christ, is too much a recap of what Massey and Kuhn have interpreted to be the meanings of Egyptian texts and symbols and is very light on presentation of the direct evidence itself to enable readers to understand how these interpretations are justified. I don’t deny a link between Egyptian religious ideas and Christianity but Harpur does not establish a definite link or explain adequately anything more than a handful of isolated tropes.

Again on “spot the meaningful parallel” yesterday I took a photo of monks in Bangkok and after looking at it again was struck with how it reminded me of the Beatles’ crossing Abbey Road. Another instance I could have used to make my point in When is a parallel a “real parallel”.

Just as I concluded a series of posts addressing Moses and the Exodus and its relationship to Akhenaten’s revolution I see Bible History Daily has picked up the theme and renewed the momentum with an article Akhenaten and Moses.

13 thoughts on “Hidden Meanings and Memories”