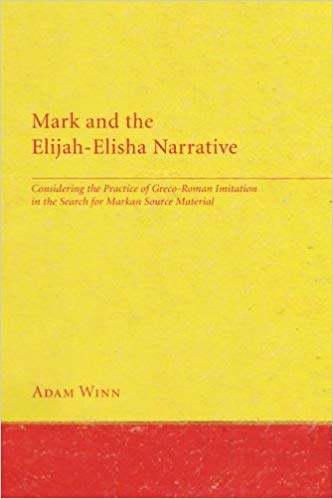 This post concludes the series of notes from Adam Winn’s Mark and the Elijah-Elisha narrative : considering the practice of Greco-Roman imitation in the search for Markan source material. Winn concludes his first chapter with six criteria he hopes will help us determine literary dependence between two texts. He has derived these criteria from his study of the way we can see Virgil imitated Homer’s epics.

One question that interests me here is whether Winn’s analysis can be usefully applied to the question of whether the Gospel of John was based on the Gospel of Mark, and if so, to what extent. Does our knowledge that an author would sometimes radically restructure his source material offer us a window into observing the fourth gospel’s author moving the Gospel of Mark’s “temple cleansing” episode from the last stages of the narrative to its beginning?

There are several others, but let’s keep our feet on the floor in these early days.

How plausible is it that author A could be dependent upon author B? Was the possible source text likely to have been available to the imitating author? That sounds to me like a pretty good place to start. The first step should be to justify why we think an author may have known and used a particular work. The answer to this question must embrace an understanding of the wider relevant literary, educational and philosophical-theological cultures.

Similarities in Narrative Structure/Order of Events

Winn believes that “as long as discernible similarities exist between the two narrative structures, literary dependence is probable.” (p. 31)

By “similarity” Winn does not mean “the same”. We should not overlook that the imitating author (e.g. Virgil) was free to reverse elements within the source, leave out or add in additional structural elements. So similarity of structure, not the same structure, is the key.

By “structure” and “order of events” Winn is presuming something reasonably complex. For example, it is clear from that Virgil’s account of Aeneas among the Libyans is based on Homer’s account of Odysseus’s stay among the Phaeacians. Despite the many very significant differences, the following structure is common to both:

I recall reading in a book of Australian aboriginal legends one tribe’s story of a great drought that was broken when water was released into the desert after a stick was struck into a rock. At the time I read this myth I was a devout Christian and immediately thought of Moses relieving the thirst of the Israelites by striking a rock with his rod to let water miraculously gush out for them to drink. Bingo! Naïve first-thought: Were the aborigines descendants of part of the mixed multitude that the Bible says came out of Egypt with the Israelites?

At least I wasn’t a complete idiot and I did simultaneously wonder if aborigines often found water in the desert by digging out the earth with sticks and stones, so that the image of water gurgling out to green a desert as a result of striking a barren rock might be repeatable among independent cultures. I might also have wondered if there was any likelihood the aboriginal myth only appeared after Christian missionary stories were circulated.

The fact is that one rock does not make a quarry. Had I been more astute at the time I might have thought to compare the Hebrew story of Moses striking the rock with his staff with the Greek play, the Bacchantes by Euripides. There we find not only the image of water rushing out of the ground when struck with a stick by a worshiper of Dionysus, but also other Exodus motifs like a fire that does not burn and rivers of milk and honey.

But those were the days before scholars had raised the possibility of links between Greek and Hebrew myths. Besides, this digression is taking us away from the subject of literary dependence — which addresses narrative structures — and delving into the way myths mutate in transmission. That’s another interesting discussion for another time.

Winn gives two reasons for thinking a common narrative structure should be considered a strong indicator of literary dependence:

And of course the more complexity there is in the common structures the less likely the two are independent.

Sometimes a similar narrative structure can be almost guaranteed to borrowed from a particular source text if there is, in addition to the structure, a salient common detail.

So with the burial of Misenus in Virgil’s epic, and the burial of Elpenor in the Odyssey, we have this common sequence of events:

To my mind that simple sequence could be found in any account of a funeral within a particular culture. Or maybe I’m being a little naive. I suppose one might point out that there are other details or structures that might make up an account of a burial: arrival or presence of the mourners, a procession of some kind, the source of the fire, etc. My point is that sometimes the order of events is not strongly persuasive that there is direct textual imitation.

But even if an order of events seems what one might expect from a common cultural matrix, the possibility of literary dependence is enhanced if even that structure is found within a similar context (e.g. taking place on a sea-shore, as is the case with the burials of Misenus and Elpenor). What clinches the possibility in this example, however, is the common detail that an oar is used to mark the graves of both characters. Dennis MacDonald, I think, would call such a striking common factor a “flag” to alert readers to the literary comparison.

I have wondered if the author of Acts alerts readers to the narrative found there being intended to be a theological counterpart to Virgil’s founding epic of Rome, the Aeneid. We have the common details of the names Aeneas (who needs to be revived — by Peter, while Paul goes to Rome itself) and Troy (Troas) which is the starting point for the overseas mission that leads to Rome. We also have the storm at sea leading not to a temporary stay at a royal household but the very reverse, a stay among very primitive peoples. Are the persecutions the counterpart of the battles Aeneas faced and from which he emerged victorious? Was Acts meant to be to some extent a counterpart to the myth of Rome’s origins by narrating the founding of the new spiritual kingdom finding a new home in Rome?

Sorry, getting sidetracked again. That has nothing to do with the Gospel of Mark.

Virgil wrote in Latin and Homer in Greek so we cannot expect verbal agreement between the two.

If two narratives share a number of specific details and also share narrative structures, literary dependence is highly probable and perhaps undeniable. The weight of combined criteria, therefore, is the most convincing evidence of literary dependence . . . (pp. 32-33)

That is not to say that a single criterion can also be a very strong pointer to imitation if it is sufficiently complex or distinctive.

A handful of minor similarities between two largely differing texts is clearly not enough to prove literary dependence. (p. 33)

So we come back once again to the difficulty of knowing where to draw a sure line between dependency and independence. There can be no hard and fast dividing line and there will always be murky areas of grey as there are in most things in life.

At the same time, though, it is clear that differences cannot undercut the conclusions we must draw from otherwise strong evidence for imitation.

Sometimes differences are easily explained by different thematic interests of the author. Some differences appear to be part of the creative imitation process, such as varying the order of events, reversals, and changing certain details. Other times we are left with no explanation for differences.

No-one can promise an exact science that will work for all instances of any human endeavours.

I have now posted on four different sets of criteria that scholars have proposed to help assess literary relationships.

The other three belong to Andrew Clark (Parallel Lives), Dale C. Allison Jr, (The New Moses) and Dennis MacDonald (The Homeric Epics and the Gospel of Mark) and are collated in my 2007 post, 3 criteria lists for literary borrowing.

7 thoughts on “Discovering the Sources for the First Gospel, 3 — Criteria”