The following comparative overview of the extents of the “orthodox” and “nonorthodox” forms of Christianity from the time of the fall of Jerusalem through the second century is taken from chapter 8 of Walter Bauer‘s Orthodoxy and Heresy in Earliest Christianity. His information is inferred from the surviving literature from this period, and later references to literature no longer surviving.

No doubt there are studies since Bauer that would alter the overview and map below.

It is easy to imagine that the Christian religion we know grew steadily from Palestine and expanded gradually outwards, firstly through Syria, Asia Minor and Greece, until it gradually blanketed the whole Mediterranean world and Middle East.

But if that was the way it happened then how can the following extent of “nonorthodox” forms of Christianity be explained? 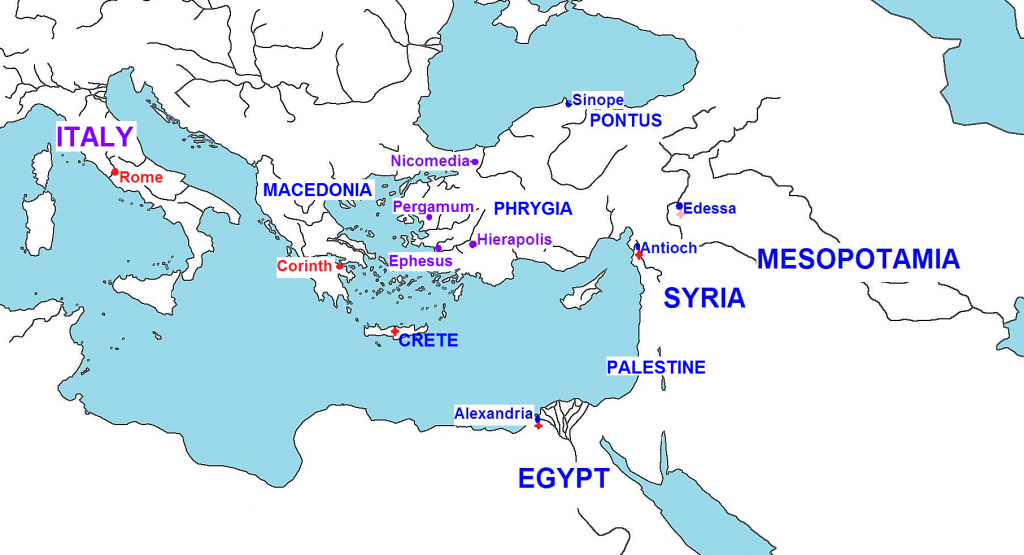 Blue = “non-orthodox” (e.g. Marcionites, Valentinians, and other such “gnostic” types)
Red = Roman-orthodox strongholds
Purple = contested areas; where “orthodoxy” was struggling, often in some form of “rear-guard” action, against the “non-orthodox”
Red stars = minority presence of “orthodoxy” (Edessa is a special case: the “orthodox” were also described as “gnostics”)

At the turn of the century, around 100 c.e., there were evidently only two major bastions of what we might call the foundations of the orthodox Christianity that we would recognize today:

“Orthodox” Christianity was confined mainly to the western Mediterranean area. But even here it hardly had the monopoly. Around the middle of the second century, Justin Martyr (an “orthodox” Samaritan Christian based in Rome), wrote of the “heretic” Marcion:

And there is Marcion, a man of Pontus, who is even at this day alive, and teaching his disciples to believe in some other god greater than the Creator. And he, by the aid of the devils, has caused many of every nation to speak blasphemies, and to deny that God is the maker of this universe, and to assert that some other being, greater than He, has done greater works. (First Apology, ch.26)

Justin wrote from Italy. Others of a similar mind who also wrote against Marcion’s “heresy” surrounding them and throughout “every nation” were likewise found based in the west.

In addition to Justin writing around 140 c.e. from Rome, there was, around the same time or slightly later, Dionysius of Corinth. He wrote against the Marcionites to a readership in Nicomedia. Nicomedia was adjacent to the Pontus home-base area of Marcionism. He also wrote to a Philip of Gortyna in Crete. So we can presume a number of “orthodox” Christians there, too.

We also have a letter claiming to be from a Clement of Rome, and prior to the time of either of these clerics, writing to a church at Corinth as a sister bastion of “truth”.

The areas of western Asia Minor appears to have been the main focus of ideological struggles for supremacy between the “orthodox” (pro-Roman) and the “nonorthodox” Christians. Indeed, given the extent of those Christianities that felt no attachment at all to the views of those in Rome, it is technically silly to talk of a “Roman orthodoxy”. But I use Bauer’s anachronistic terms because they make sense to most of us, even if they are only meaningful in hindsight.

It is in the cities of western Asia Minor that we are probably right to imagine “orthodoxy” struggling against “nonorthodoxy” — with orthodoxy holding the upper hand in only one or two cities here.

The prominent “orthodox” names influential in this region:

Thus the easternmost post of ecclesiastical opposition to Marcionism was Hierapolis (Papias‘s home) in Asia Minor.

Theophilus of Antioch, who was beleaguered by heretics and under the ecclesiastical influence of the West

At end of second century, Clement brings Alexandria into the fold for first time, although some of his writing makes it hard to classify him as a strict “proto-orthodox” Christian.

Later still, we find the Bardasanes attempting to break the monopoly of Marcionism in Edessa. Bardasanes’ “orthodox” credentials are dubious, however. The dividing line between the two could be quite blurred.

The main stronghold where Marcionism was completely untroubled by “Roman-led orthodoxy” was from around Hierapolis and eastward. It included the areas in Asia Minor said to have been originally evangelized by Paul, such as Galatia, Lycaonia, Cilicia.

From Hierapolis and westward, Marcionism was also prevalent. But in the west it was more immediately challenged by “the orthodox church”.

Valentinus had been active in Rome and Egypt. His following spread in various forms (sects) over the whole empire from the mid second century.

The Valentinian Marcosian sect advanced as far as Gaul and Italy in the second century. Its eastern branch was particularly active in Egypt, Syria and beyond. There was no effective “orthodox” opposition to Valentinians in the east. The only exceptions where we do have records of some orthodox “outposts”:

According to the evidence of Eusebius, “orthodoxy” made no inroads into the east till the third century.

The East generally was the terrain of “unorthodox” Christianity:

Given the areas of Paul‘s missionary activity (Lycaonia, Pisidia, Galatia) and letter of Pliny, the silence of Eusebius about ecclesiastical life in central and eastern Asia Minor is doubly surprising.

All the evidence cited by Eusebius is in the West, while on his own home territory in the East he s silent.

Given the evidence of Edessa and Egypt and other regions in the east, we can say that in the second century Christianity was nonorthodox.

The evidence of Eusebius

Thus we can ascertain by inference that Roman orthodoxy reached only to western Asia Minor, approx to Hierapolis, during 2nd century.

There was also an orthodox minority in Antioch.

Mixtures of orthodoxy and nonorthodoxy are also found in:

Only Rome and Corinth

Also the distinctive character of Rome passed over to Corinth around 100 c.e., where it remained

The size of the matter

Churchmen often bewail the threats they face from heresy, but never attempt to adduce numerical evidence of their successes against them. They never say, “Only a couple of fools, beguiled by the devil, are in the opposition.”

It is not always easy to classify writings between orthodoxy and heresy. Where do we classify the following?

Note also Bardasanes. Why is it, moreover, that even reputed “orthodox” churchmen such as Justin Martyr are known only by certain apologetic writings aimed at unbelievers, while their supposed works against “heresies” such as Marcionism are lost?

The greater abundance of literary works by heretics ?

We have volumes by Irenaeus, Tertullian and others against heresies. But there appears to have been an even greater volume of writings by the heretics themselves.

Hegessipus, Gaius, Irenaeus et al all complain of the fruitful literary activity of the heretics.

Evidence of Harnack is that heretics produced far more literature than orthodox.

Eusebius provides evidence of very limited orthodox literature in second century, and though it was supposed to have been preserved from that time of most severe persecutions right up to fourth century, once Eusebius had cited the titles (rarely showing evidence he actually knew the contents of most of these), it was mostly lost. And even in cases of Justin, Theophilus and Tatian, it just so happens that the works they supposedly wrote against heretics were lost, but their works addressed to unbelievers survived.

The reckless speed with which, from the very beginning, the doctrine and ideology of Marcion spread can only be explained if it had found the ground already prepared. Apparently a great number of the baptized, especially in the East, inclined toward this view of Christianity and joined Marcion without hesitation as soon as he appeared, finding in him the classic embodiment of their own belief. What had dwelt in their inner consciousness in a more or less undefined form until then, acquired through Marcion the definite form that satisfied head and heart. No one can call that a falling away from orthodoxy to heresy.

Can this state of affairs from around 100 to 200 c.e. be adequately explained through the generally accepted (“orthodox”) view of Christian origins?