A popular book cited by lay readers and scholars alike as presenting “a case for the historical reliability of the synoptic Jesus tradition” is The Jesus Legend by Eddy and Boyd. Richard Bauckham calls it “one of the most important books on methodological issues in the study of Jesus and the Gospels to have appeared for a long time.” Craig A. Evans says it “is the best book in its class. Eddy and Boyd demonstrate mastery of the disciplines essential for critical assessment of the Gospels and competent investigation of the historical Jesus.” Paul Eddy is cited as a professor of biblical and theological studies at Bethel University and Gregory Boyd, PhD, is a senior pastor. 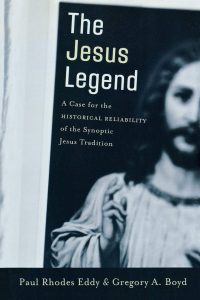 These praises of this book are, simply, staggering to someone who has actually taken the time to read it with a view to better understanding the conservative or establishment side of the discussions about the historicity of Jesus. The book is, in fact, a hodge podge of misrepresentations, obfuscation of contrary arguments, dishonest footnoting, misleading assertions, . . . Well. Let’s take just two pages that I was consulting recently to dig into the arguments surrounding a passage in Thessalonians. . . .

Before discussing these, one introductory note is appropriate. E&B are open about their methodological approach to their arguments. They argue that it is quite legitimate to accept a “low probability” (“super-natural”) argument in instances where “an event . . . defies plausible naturalistic explanation.” (p.90)  That conjunction of “plausible” and “naturalistic” is interesting. One surely must wonder what ‘naturalistic’ explanation could possibly be ‘implausible’ compared with resorting to what is by definition the least probable of all explanations, a miracle. This assumption that miracles should be accepted as explanations for the claims of the New Testament literature has its impact throughout the remainder of their book. E&B explain:

This open approach to critical historiography will form a part of the methodological backdrop for the remainder of this book.

In stating this from the outset, E&B explain why they have been so inconsistent and less than fully intellectually honest in their arguments. They have made up their minds that the narratives of the Gospels and Acts, and the self-witness of the New Testament letters, are all basically “true”. One wonders then why they would really bother with gathering, therefore, “scholarly naturalistic” arguments to support their case. This must surely wear down their patience. From the outset they reject enlightenment methodologies of naturalistic reasoning and scientific approaches. So the rest becomes merely a matter of gathering any “naturalistic-reasoned” argument from any source, and even arguments that simply look good enough from a distance, and sticking them together in a book to appear to be a reasoned rebuttal of arguments against the historicity of Jesus. The alternative explanation for this shoddy and misleading book is less flattering.

However, as I. Broer has effectively argued, the evidence from early Christian writings (e.g. 1 Clement, Ignatius, Polycarp) suggests that the relatively widespread knowledge of the Pauline letters would naturally have served to hamper the easy acceptance and/or creation of interpolations.29

The even footnote this passage to:

A reader would naturally think E&B here are pointing to I. Broer’s argument as something they have themselves read and with which they agree. They are clearly conveying the impression that they know Broer’s argument well enough to be able to describe and reference it in this way.

But their pants drop to their ankles when one happens to read an article by Jon A. Weatherly, The Authenticity of 1 Thessalonians 2:13-16: Additional Evidence, in the Journal for the Study of the New Testament, 42 (1991) 79-98. There, on page 79, one reads:

What’s the bet E&B have never read I. Broer at all and that all they know of Broer is Weatherly’s 1991 claim?

I wouldn’t really care if so many people weren’t relying on E&B as some sort of authority, but they clearly are.

It seems that E&B realize that lots of footnotes make a book look impressively well researched and authoritative. It also seems that they expect few readers to actually bother to check those footnotes to see that they are indeed really doing the job claimed for them. Again on page 212 E&B write:

. . . these verses seem stylistically uncharacteristic of Paul, but it is not clear that they are so to an extent that would warrant the conclusion that they are not Paul’s own words.30

Then the supporting footnote:

Now I read E&B here as affirming that the linguistic arguments for 1 Thess. 2:13-16 being an interpolation are not strong, and that all one has to do to confirm this is to turn to the cited articles by Weatherly and Simpson. So that’s what I did. I read Weatherly’s article first, and then Simpson’s. It turns out that while both authors do attempt to find reasons to think that the passage is not an interpolation, the two scholars directly contradict each other.

Simpson even summarizes many of arguments also advanced by Weatherly and shows them, often on linguistic grounds, to be either false or without substance. Specifically, Simpson trounces the following arguments found in Weatherly:

Yet somehow E&B have managed to claim that BOTH scholars have refuted the linguistic arguments!

This reminds me of Groucho Marx: “These are my principles. If you don’t like them, I have others.”

As for E&B’s claim that these two authors have “convincingly answered” the stylistic argument, here is what Simpson himself writes (p.43) in his article:

Many form-critical solutions are plausible, both with and without 2:13-16, and all are to some degree problematic.

This is not to say that any of these arguments do not point to real problems in regard to 1 Thess 2:13-16, only that the interpolation view is not their best solution.

Simpson fully acknowledges the strength of many of the arguments for interpolation. He does not claim to have nailed the coffin on them. He does attempt to argue, against Pearson, for a plausible explanation for Paul expressing, over time, sharply contradictory words about Jews and their ultimate fate. His arguments against Schmidt are often technical and subtle. They are hardly mark a finality to the discussion as E&B suggest, and as unwary readers would too easily assume from E&B’s statements.

1 Thess. 2.13-16 remains a difficult passage for interpreters of Paul. That the apostle who wrote with such compassion and hope of his Jewish compatriots in Romans 9-11 could write so bitterly of some of them in 1 Thessalonians 2 is problematic, though hardly unprecedented. But another look at the data shows that the evidence for its inauthenticity is, at best, equivocal.

So these authors contradict each other in some key linguistic arguments. Each admits that any explanation, even their own, is not without difficulties. Yet E&B cite them both as having “convincingly answered” — as if they have put to rest — the linguistic arguments against inauthenticity of the Thessalonians passage.

I opened in my “Plagiarism” section with E&B discussing the significance of a lack of textual evidence for an interpolation. E&B clearly consider the lack of manuscript evidence a major argument. They begin their argument with:

It is no minor problem for a textual theory when there is no textual evidence to support it. Yet this is the case here. Every ancient copy of 1 Thessalonians we have contains verses 13-16. The claim that this passage is an interpolation often rides on the coattails of a wider claim regarding a variety of Pauline interpolations, again generally without manuscript evidence. 28

Again one looks down to check the footnote:

I summarize here the evidence for the “culture of interpolations” that Walker argues must surely outweigh the paucity of manuscript evidence. They are more fully set out in post linked above.

E&B cite Walker as a support for their own claim that there is indeed a lack of manuscript evidence, but their integrity is open to question when they fail to address the fact that Walker himself argues that the manuscript evidence is clearly often not critical at all!

It is also slightly amusing to see E&B failing to address this argument over manuscript evidence and interpolations when one of their cited authors even argues against them:

— which is exactly how E&B do begin their argument against interpolations!