“Change for the poor means food and jobs, not a relaxed dress code or mixed recreation…Politics in Iran is a lot more about class war than religion.”Financial Times Editorial, June 15 2009

June 19, 2009 “Information Clearing House” — There is hardly any election, in which the White House has a significant stake, where the electoral defeat of the pro-US candidate is not denounced as illegitimate by the entire political and mass media elite. In the most recent period, the White House and its camp followers cried foul following the free (and monitored) elections in Venezuela and Gaza, while joyously fabricating an ‘electoral success’ in Lebanon despite the fact that the Hezbollah-led coalition received over 53% of the vote.

Evidence of orchestration of the protests for western audiences? Iran Faces Greater Risks Than It Knows and Obama’s administration’s directive to Twitter.

And from my favourite Mid East correspondent, Robert Fisk, who gives an eyewitness account of who the demonstrators are, and what they want, and corrects a lot of misleading impressions coming through other channels that lazily rely more on official news releases and rumour: 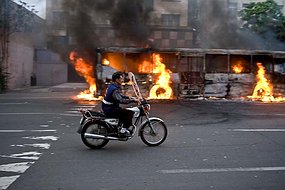 ‘The authorities are losing control of what’s happening on the streets and that’s very dangerous and damaging to them’ (www.flickr.com: Shahram Sharif)

The long-standing Middle East correspondent for The Independent, Robert Fisk, is defying the government crackdown on foreign media reporting in Iran.

As he explains, he has been travelling around the streets of Tehran all day and most of the night and things are far from quiet:

See the Australian ABC news site for the full article and audio link.