H/t a BCHF thread: A book due out in a few months from now, The Madness of King Jesus: The Real Reasons for His Execution by Justin Meggitt. 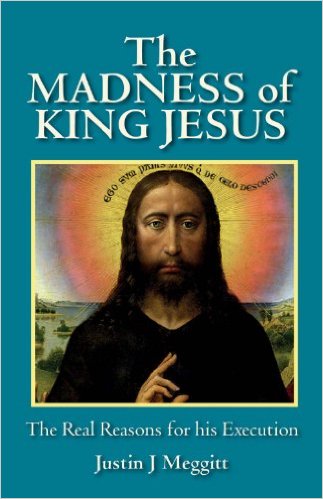 Given the understanding that the crucifixion of Jesus is “one of the most secure facts” we have in history Justin Meggitt tackles one of the perplexing conundrums that the crucifixion has left us: why did Pilate crucify Jesus yet not lift a finger against his followers, even allowing them to continue preaching about Jesus after his execution?

Some of us will be familiar with Paula Fredriksen’s answer to this question in Jesus of Nazareth, King of the Jews. Fredriksen’s argument is that Pilate knew Jesus was harmless — he had, according to the Gospel of John, travelled to Jerusalem for several years running where he preached quite harmlessly. For some reason on that last journey, however, the crowd got out of hand in their response to his preaching about the coming kingdom, and Pilate needed to nip in the bud early signs of trouble. Jesus was the one they were agitated over, so a quick crucifixion solved the problem. The disciples were of no account according to this equation.

Meggitt explains his confidence in the historicity of the crucifixion on page 380:

These points (based on criteria of authenticity; an ideologically framed chronology; and the appeal to incredulity) are virtual mantras that are too rarely seriously questioned.

Another scholar, Fernando Bermejo-Rubio, in a 2013 article in the Journal for the Study of the New Testament, “(Why) Was Jesus the Galilean Crucified Alone? Solving a False Conundrum”, resolves the dilemma by denying that Jesus was crucified alone but was indeed crucified with followers:

The view that those crucified with Jesus had nothing to do with him is not only exceedingly improbable from a historical standpoint, but it uncritically relies upon the story told in biased sources: only the theological necessity to distance Jesus from any rebellious connection can account for the tenacity with which this view is held.

Meggitt proposes a different solution. The book is not yet published but he has had an article on the same theme published in the same journal in 2007 (JSNT 29.4: 379-413), “The Madness of King Jesus: Why was Jesus Put to Death, but his Followers were not?” The abstract:

To argue that Jesus of Nazareth was put to death by the Roman authorities because they believed him to be a royal pretender of some kind, fails to explain satisfactorily why he was killed but his followers were not. A possible solution to this conundrum, which is supported by neglected contextual data, is that the Romans thought Jesus of Nazareth to be a deranged and deluded lunatic.

The first part of the article outlines the evidence that it was standard practice for Roman rulers to pursue and execute followers of would-be insurrectionists along with their leaders. END_OF_DOCUMENT_TOKEN_TO_BE_REPLACED