Nanine Charbonnel concludes her Prelude to her discussion of the gospels with a fascinating overview of literary technique that I think is not widely known outside the halls of academia. An author could compose a book in such a way that its thematic structure was a representation of . . . a topographical setting, or a building, or an animal — but not for any mundane reason. No, think of a place where God met and spoke with his people, or a sacred building like a tabernacle for the dwelling of God, or a sacrificial animal.

Once again NC turns to the anthropologist Mary Douglas and her book Leviticus as Literature. It is worth reading the book in its entirety in order to appreciate the anthropological foundations to her analysis. I had to pull myself away from revisiting milestone anthropological studies in order to complete this post. (There is even a book dedicated to responding to Douglas: Reading Leviticus: Responses to Mary Douglas, edited by John F. A. Sawyer. Some readers here will like to know that the last chapter in that volume is titled “Leviticus in Mark: Jesus’ Attitude to the Law”, by Alan Watson.)

Modern readers (at least most of us, I am sure) love to read from start to finish, usually as fast as comprehension will allow, with the assumption that the author has composed a linear narrative or exposition.

Now we know the Bible forbade the making of images but that did not stop authors from devising all sorts of word images. In our previous posts we have even seen how the Hebrew consonants forming words could be subject to interpretation based on their shapes and meanings (e.g. beth, meaning house). In one of our earlier posts some readers, including me, expressed some doubt that certain mystical interpretations raised by NC really did date back to the Second Temple era. We tend to think of them as kabbalistic and originating in the medieval era. NC disputed that assumption but I have not followed up her references (not wanting to take on another work of translating French at this stage). So I was intrigued to see Mary Douglas write the following:

The central idea of this book is that Leviticus exploits to the full an ancient tradition which makes a parallel between Mount Sinai and the tabernacle. Various antique transpositions between houses, bodies, and temples prepare us for believing that Ramban, the mystic philosopher and revered medieval interpreter, was drawing on very ancient traditions when he read Exodus so as to draw a parallel between the desert tabernacle and Mount Sinai. The tradition goes back to Exodus. . . .

Then a few pages on,

It might well be objected that this is a medieval fantasy of no relevance for Leviticus. Ramban is the name of Rabbi Nachmanides (1194–c.1270) and his conjectures might have had nothing to do with Leviticus but come straight out of thirteenth-century mysticism. Milgrom, who is well aware of this question, considers that Ramban was drawing on an ancient tradition. He bases the interpretation on the text of Exodus itself, and particularly on the name of the tabernacle as the Tent of Meeting. After considering and dismissing several speculations on the origin of the term, he says:

‘Nevertheless, the immediate archetype for P’s Tent of Meeting is not some mythic Canaanite model or hypothetical Hittite example, but the ancient Israelite tradition of the theophany at Mount Sinai. P (Exod 24: 15b; 25: 1) concurs with and indeed incorporates the epic tradition (Exod 19. 20; 20: 1) that God descended upon Sinai . . . ’ [Milgrom 1991, 142].

This was where the initial meeting between God and Moses took place. At the end of Exodus, God transferred his earthly presence to the tabernacle in the form of fire and cloud. The tabernacle thereafter became the site of all subsequent meetings. God’s direct presence is too terrible to be endured, so it is veiled in cloud, and the holy of holies in smoke of incense. The cloud is the sign of God’s presence as he journeyed with his people in their wanderings. At Sinai when all the work of the tabernacle was finished, ‘Moses was not able to enter the tent of meeting because the cloud settled upon it and the glory of the Lord filled the tabernacle’ (Exod 40: 35). In Genesis smoke of sacrifice attracted God’s attention after the flood. In Exodus the incense altar was used for the priest to send up clouds of fragrant smoke (Exod 30: 7–8, 34–8; 40: 26). Smoke impedes visibility, like a cloud.

Thus, Milgrom argues, the name ‘Tent of Meeting’ gives grounds for thinking that the correspondence between tabernacle and Sinai are at least as old as Exodus. The same argument is made by Alfred Marx when he shows that God’s presence at Sinai and his presence at the altar at the time of sacrifice are to be read as strictly parallel. The mountain and the altar are figures of one another. [Grappe and Marx 1998, 24]. It could even be older, derived from the ancient symbolism of the cosmic mountain used in Canaanite religions. The idea of a cosmic centre of the world, on a raised place, on which a shrine has been built, is common around the Mesopotamian region.

In the diagram here I have copied Mary Douglas’s illustration of the tabernacle and placed it beside a representation of Mount Sinai. 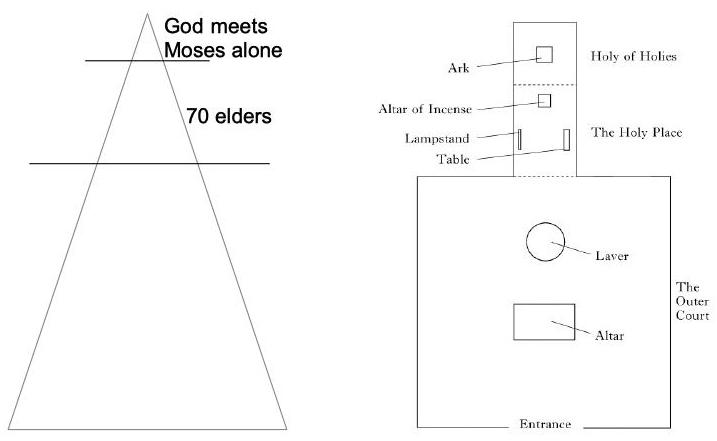 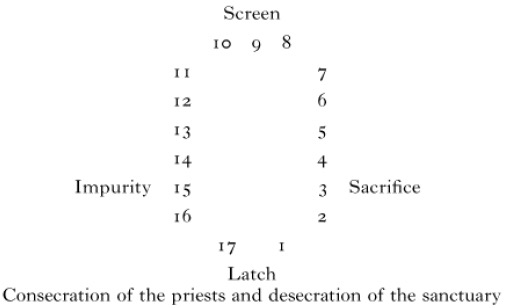