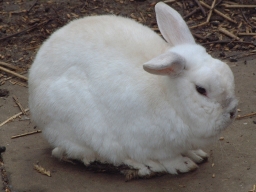 must die to save

Once again farmer and conservationist lobbies are coming together to try to persuade Australians to scapegoat the easter bunny and worship, buy and eat instead our endangered bilby in its place. The bilby represents, I suspect, a deeply hidden part of the Aussie psyche — what we like to think of as our “unique character”. Not inappropriate, given the possible scapegoat origins of the Christ-myth.

After all, the rabbit is an unwelcome foreigner import that undermines and destroys the livelihood of the “good” foreigners we have brought in — sheep, cattle. Not unlike the attitudes towards unwelcome foreign human counterparts who too many of us see as undermining the way of life of us, the “good” white English speaking imports.

And the bilby is obviously the perfect symbol of our national soul — endangered, fragile, in need of drastic measures if it is to survive — and the main enemy is of course that rabbit pest. We once introduced diseases to the aboriginals, gave it to them in blanket and food gifts — just as we carefully handled the rabbits to give them mixemitosis in hopes of eradicating the lot. Didn’t work in either case. Now the aboriginals have been somewhat redeemed as part of our decorative fauna for tourists and image promotion (— let’s not trouble ourselves that their life expectancy is still 17 years less than the whites’).

What a coincidence all this has against a backdrop of a cultural and political war against the unwelcome foreigners, the Asians, especially the Moslem kind. Africans are okay so long as they are expat whites from the Southern parts of that continent or Sudanese who are on the right religious side (catholic) of the war there.

I feel ashamed of “patriotism” when political leaders are able to so easily able to whip up racist fears among so many compatriots and instil in them such a rabid fear that the “unique character” of Australians is under threat. Enter the bilby symbol.

For more on the bilby check out:
http://www.abc.net.au/science/scribblygum/april2006/

For more links scroll down here.

No no, I’m not against conserving the bilby. Just find it of interest the way national attitudes to bigger issues subliminally find expression through our attitude towards animals — like kangaroos, cane toads, cockroaches, sharks, koalas, wallabies, dingoes, brumbies, rabbits and bilbies.

An interesting read is Adrian Franklin’s Animal Nation: the true story of animals and Australia. Not that he discusses the easter bilby, but the message from this sociologist is nonetheless interesting.