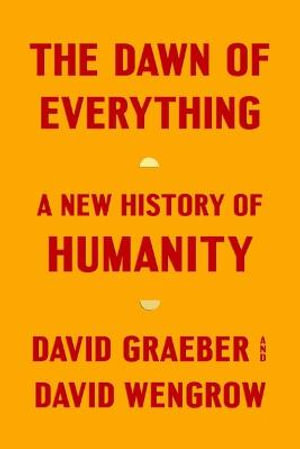 Everything I read, learned and taught about the stone ages and beginnings of civilization was wrong. An anthropologist and an archaeologist have got together to update us all on the discoveries that have been appearing in the scholarly literature over the past sixty years. The findings give great encouragement to those of us who are concerned about humanity’s ability to change course in the interests of our long-term survival.

I once liked the idea of Rousseau: in our “native state” we are innocent, good; it is the chains that have come with civilization that have degraded us.

But over time I came to fear Hobbes might be more right than I wanted him to be: in our native state our life is “nasty, brutish and short”; it is the controls that civilization has imposed that have obliged us to live according to the “better angels of our nature”.

No. Neither Rousseau nor Hobbes had the right model. We know that people as a whole cannot be lumped under either of the simplistic labels of “good” and “bad”. We can be very, very good and we can be very, very bad. For those of us who see the need for change in the way we live if we are to get through the threats we are facing now of runaway climate change and nuclear war and god knows what else and are keen to join any organized action for a better future, we can take heart from David Graeber and David Wengrow who, in The Dawn of Everything, demonstrate that humanity has done things better in the past and humanity can change.

The Dawn of Everything is one of those books that really does change everything about the way we see ourselves as a species. Several Youtube programs of over an hour length are available for anyone wanting to see the authors’ scholarly peers discussing the book. By bringing together the findings of anthropology and archaeology from the last generation they really are giving the public promise of a new vision. They are not dogmatic about their findings: they simply present the evidence and raise the questions. The rest is up to us.

Luckily I did not know when I opened my electronic copy of the book (one of questionable legal status) that it was over 700 pages long. If I had known that I most likely would have put it aside until I found “the time” to read it. But in Rousseau-like ignorance I undertook my journey and read nothing else for the next two to three days.

— Agriculture did not ruin us. We, humans, did not organize ourselves into cities and kings once we “discovered agriculture” and the need for all the land management that is necessary to make it work. Jared Diamond was wrong when he said in Guns, Germs and Steel that agriculture was humanity’s biggest mistake, leading to overcrowded cities and diseases, poverty and the rest.

— There is nothing inevitable about living in a hierarchical or bureaucratic society: people, the same people, have been known to switch on a seasonal basis between highly authoritarian rule and open, small-scale, democratic self-government.

— Big cities are not, by definition, bad: people have created large cities that are non-hierarchical, non-bureaucratic, and open to regional self-government and significant forms of equality. And no poverty.

— Poverty is not inevitable in any society, large or small. It is indeed possible — our experience as a species proves it — to live in a just society without judges, police, jails.

— Steven Pinker’s thesis in The Better Angels of Our Nature was flat wrong. The evidence does not support his view of a relatively violent “pre-civilization” past and a comparatively more peaceful present. In the past there were indeed periods of warfare but there were also very long periods of peace.

— Western civilization as understood according to its historical European base is not the bee’s knees of human accomplishment. We take it for granted that we must study, pass exams in degrees of literature, philosophy, whatever to enter the “public service”. We copied that from the Chinese. We take it for granted that our base-freedoms of liberty equality and fraternity were the products of the European Enlightenment. Rather, European philosophes were inspired — it almost feels like heresy to say it — by “savages” in the New and other worlds they conquered. (For evidence of this claim one can see another work more readily at hand on archive.org: New Worlds for Old : reports from the New World and their effect on the development of social thought in Europe, 1500-1800 (As I said at the beginning, Graeber and Wengrow are not writing a whole lot of new ideas: they are bringing to the public awareness the evidence that has been accumulating in scholarly publications now for the past fifty to sixty years.)

Graeber and Wengrow identify three freedoms that they suggest “make us human”, and three corresponding forms of control that are found in the evidence. They do not say that these are “THE” freedoms of humanity. They acknowledge there may well be others, but for a discussion starter these are the ones they identify:

The controls or forms of domination? They are:

Kim Kardashian is offered as the focus of an imaginary exemplar:

To illustrate why not, and continue our thought experiment, let’s take a different sort of property. Consider a diamond necklace. If Kim Kardashian walks down the street in Paris wearing a diamond necklace worth millions of dollars, she is not only showing off her wealth, she is also flaunting her power over violence, since everyone assumes she would not be able to do so without the existence, visible or not, of an armed personal security detail, trained to deal with potential thieves. Property rights of all sorts are
ultimately backed up by what legal theorists like von Ihering euphemistically called ‘force’. But let us imagine, for a moment, what
would happen if everyone on earth were suddenly to become physically invulnerable. Say they all drank a potion which made it impossible for anyone to harm anyone else. Could Kim Kardashian still maintain exclusive rights over her jewellery?

Well, perhaps not if she showed it off too regularly, since someone would presumably snatch it; but she certainly could if she normally kept it hidden in a safe, the combination of which she alone knew and only revealed to trusted audiences at events which were not announced in advance. So there is a second way of ensuring that one has access to rights others do not have: the control of information. Only Kim and her closest confidants know where the diamonds are normally kept, or when she is likely to appear
wearing them. This obviously applies to all forms of property that are ultimately backed up by the ‘threat of force’ – landed property, wares in stores, and so forth. If humans were incapable of hurting each other, no one would be able to declare something absolutely sacred to themselves or to defend it against ‘all the world’. They could only exclude those who agreed to be excluded.

Still, let us take the experiment a step further and imagine everyone on earth drank another potion which rendered them all incapable of keeping a secret, but still unable to harm one another physically as well. Access to information, as well as force, has now been equalized. Can Kim still keep her diamonds? Possibly. But only if she manages to convince absolutely everyone that, being Kim Kardashian, she is such a unique and extraordinary human being that she actually deserves to have things no one else can.

We would like to suggest that these three principles – call them control of violence, control of information, and individual charisma – are also the three possible bases of social power. . . . .

On the freedoms, Graeber and Wengrow point out that in their early discussions about these questions they quickly came to realize that the question, “What is the origin of inequality?”, is a strange question in the light of what “we” have come to learn about the wider experience of human history:

This book began with an appeal to ask better questions. We started out by observing that to inquire after the origins of inequality necessarily means creating a myth, a fall from grace, a technological transposition of the first chapters of the Book of Genesis – which, in most contemporary versions, takes the form of a mythical narrative stripped of any prospect of redemption. In these accounts, the best we humans can hope for is some modest tinkering with our inherently squalid condition – and hopefully, dramatic action to prevent any looming, absolute disaster. The only other theory on offer to date has been to assume that there were no origins of inequality, because humans are naturally somewhat thuggish creatures and our beginnings were a miserable, violent affair; in which case ‘progress’ or ‘civilization’ – driven forward, largely, by our own selfish and competitive nature – was itself redemptive. This view is extremely popular among billionaires but holds little appeal to anyone else, including scientists, who are keenly aware that it isn’t in accord with the facts.

Equality, they say, is “a direct extension of freedom; indeed, it is its expression.”

It also has almost nothing in common with the more familiar (Eurasian) notion of ‘equality before the law’, which is ultimately equality before the sovereign – that is, once again, equality in common subjugation. Americans [G and W are speaking of the Native Americans], by contrast, were equal insofar as they were equally free to obey or disobey orders as they saw fit. The democratic governance of the Wendat and Five Nations of the Haudenosaunee, which so impressed later European readers, was an expression of the same principle: if no compulsion was allowed, then obviously such social coherence as did exist had to be created through reasoned debate, persuasive arguments and the establishment of social consensus.

I expect to write more on this book in coming posts. It is indeed a great loss that one of the authors, David Graeber, died so soon.